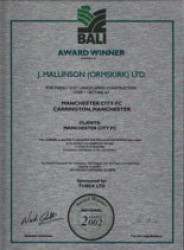 Last summer, the area known as pitch five was re-constructed in a similar way to the fibresand area, with the exception that loksand was used instead, the total area of to be redone was 10,000 square metres. This area is also used by the first team and like the fibresand has performed exceptionally well under heavy training sessions which have been continually monitored to spread the training around the site.

The area that has seen no work on them other than our own in-house renovation work are pitches 3 and 4, these are used twice a week by the academy, and also by the first team in the winter months when there is frost as we cover pitch 3 up with frost covers to ensure training

To look at these pictures, it is hard to believe that there is no

In case of a really heavy frost, the tennis courts that were in place when we moved in were converted to a 60x40 fieldturf area and can be used whenever needed. The good thing about this area is

The whole site is enclosed with a seven foot fence, however in the unlikely event of one of our players kicking a ball over the crossbar, we have movable ball stop nets, around twenty feet high and on wheels, which are moved around depending on where the team are training.

One of the hidden features on the site is the irrigation tank-you cant see it anywhere! Last year, a wall was put around it and the club badge was mounted on it to make it seem like part of the existing building.

We are very fortunate to have such a good training facility which is without doubt, one of the finest in the country, in the last year we have had people coming from as far away as China and Nigeria to look at it and it is also a major contribution in why the team have no need to train at the stadium itself due to the outstanding quality of the pitches that we have here.