0 A proud week for greenkeeping

A mixture of experienced and youthful BIGGA members headed to the Wirral from a huge range of clubs far and wide - and dealt expertly with a number of challenges including an unprecedented two-tee start on Saturday. 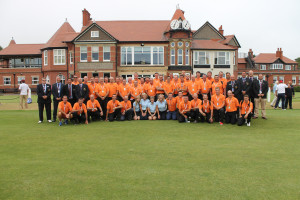 The intense week began with a briefing from the club's Links Manager Craig Gilholm, who generously gave up his time on the Wednesday evening to explain his team's plans and outline the type of support he was anticipating alongside the R&A's Director of Rules Grant Moir. A mere 12 hours before David Howell hit the first shot in anger, Craig was happy to answer questions in the evening sunshine as he gave details of the agronomic challenges involved in preparing a course for The Open.

Then it was a case of setting early alarms with the first bus heading towards the course at 5am to ensure the first group of greenkeepers arrived in plenty of time before the tournament's 6.25am start.

Their main duty was to rake the course's 82 bunkers as play progressed - and they were kept busy as 335 required raking during the first round. By the time Rory McIlroy was crowned champion, they had raked a grand total of 945. The team also assisted with evening divot duty - so the combination of early starts and nearly six hours of raking in sweltering heat shows how dedicated and committed they have to be.

As Saturday approached, the decision to operate a two-tee start due to the forecast of thunderstorms meant that for the first time, bunker rakers joined play on both the first and 10th tees.

During an eventful week the team gained dozens of anecdotes they will be retelling for years. Steve Hemsley, Head Greenkeeper at Bolton Old Links Golf Club, was interviewed by both BBC Radio and The Daily Telegraph as he waited to rake for McIlroy, Jordan Spieth and Hideki Matsuyama - and Rickie Fowler was happy to pose for pictures with the team and sign autographs at the end of the Championship as he discovered their last day orange shirts matched his.

Joe Dormer, Greenkeeper at West Sussex Golf Club, summed up the mood when he said: "I couldn't have wished for a better bunch of people to spend this week with. Thanks to BIGGA for the opportunity, I will never forget it."

BIGGA Chairman Chris Sealey, who raked five bunkers during the second round, said: "It was great to see Craig Gilholm and his team praised for their efforts during the presentations at the end of the tournament, as the course was in absolutely stunning condition and a terrific advertisement for greenkeepers who sometimes remain unsung heroes.

"During the week I've heard countless hugely positive comments on both the course and the BIGGA Support Team. Their professionalism, hard work and good humour throughout really shone through. The two-tee start on Saturday showed how crucial the BIGGA team's presence is as everyone worked hard to ensure this unusual situation was handled professionally. They were a credit to the Association and the industry."