by Sofia Martins
in Machinery & Mechanics, Golf, and Battery/Electric Power
on 14 Jul 2022

0 A quasquicentennial celebration for Canmore with Toro and Reesink

Canmore Golf Club is celebrating 125 years with delivery of the industry's first and only fairway hybrid mower, the Reelmaster 5010-H from Toro. 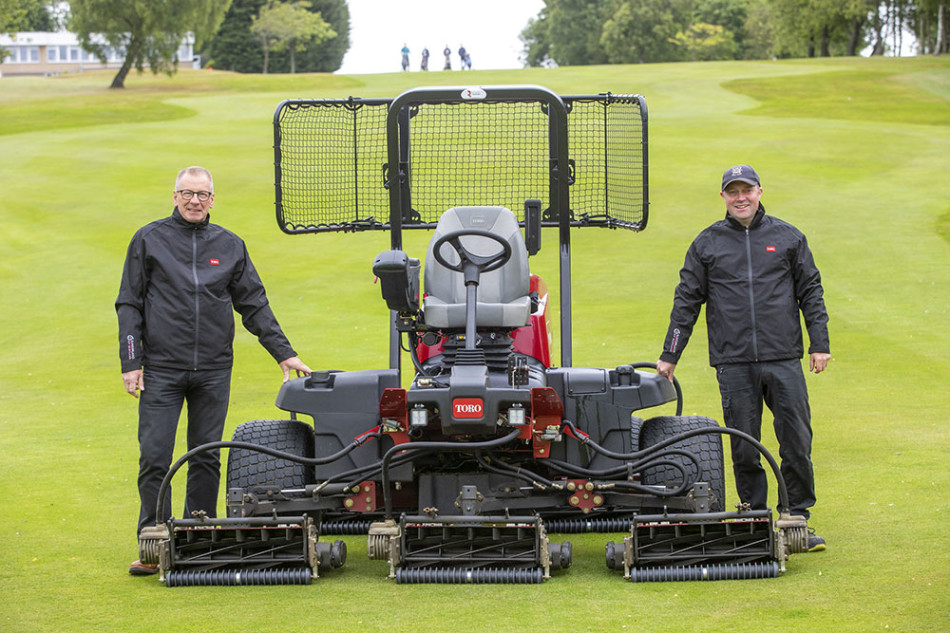 It's quite the achievement to reach your quasquicentennial milestone and Canmore Golf Club in Dunfermline, Fife decided to combine that with also making it the year they chose distributor Reesink Scotland to help address several problems it was experiencing, all of which were solved thanks to this brand-new budding relationship and one of Toro's most revolutionary inventions: the Reelmaster 5010-H.

Golf course manager Graeme Holland, who has been overseeing operations at the club for over 30 years, explains the decision-making process: "It was time to make some changes. We needed to reduce fuel consumption and noise pollution and just felt the time was right to go the hybrid route for environmental reasons, and we needed a dealer we could rely on."

Recognised as the industry's first and only fairway mower with a true hybrid drive system, the Reelmaster 5010-H represents an absolute breakthrough in technology and is a big highlight in the turfcare machinery journey towards electric power. And now two are part of Canmore's arsenal.

Graeme continues: "The reliability is there with Toro. They test the machines a lot more than the competition so they're a lot more user-friendly and easier to work with. They have similar controls as the greens machines and that means we can swap machines with no issues. Sometimes we don't even need to call in a mechanic because we can work out the problem ourselves as they're so intuitive."

"The price of fuel is horrendous right now so any savings we could make and redistribute to other parts of the golf course were most welcome. We're saving around 20 percent on fuel now and that works out to be quite a substantial figure on the total cost of ownership."

"Three quarters of the course is surrounded by houses, so noise was an issue when we started work in the mornings. Now we carry on with our routine as normal but with less disturbance. Pollution-wise, they're a lot cleaner than diesel and of course there's no risk of hydraulic oil spills."

Graeme further comments on the performance of the Reelmaster and how he had some reservations at the start: "We have a lot of slopes to cut so we needed a fairway machine that had four-wheel drive and enough power to get the job done," he explains. "I was a bit sceptical as the 5010-H only has a 25hp engine but with the batteries also producing power, it's more than enough and we can safely work in any conditions on the course. We're getting a very consistent cut throughout and thus there's a much better level of play on the fairways."

The decision to change dealers came into play as the service the club was receiving from its previous dealer was not up to par with Graeme's standards. He comments: "The overall experience is better with Toro and Reesink. The service department at Reesink Scotland, from the reps to the mechanics, is brilliant. Their back-up and knowledge of the machinery is fantastic - they know everything there is to know. Their service van holds maybe fifty common parts that we would use, so all it takes is a quick call and they'll have whatever it is we need ready the next day.

"We're always extremely busy as we're a small club with just about one of every machine. So, if one goes down, we need that quick turn-around to allow us to keep things always moving. Reesink fits the bill for that, and we couldn't be happier we made the switch especially in such a key year in our history."