0 A Question of Balance for Your Soil 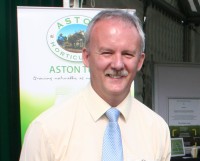 Carbon is the basic building block of life for soil microbes, but nitrogen is also necessary for such things as proteins, genetic material and cell structure

Turfgrass surfaces are intimately linked to the soil and soil life (biota) in which they grow. Turfgrass roots act as a host for many soil organisms, such as herbivores, pathogens and symbionts, as long as there is a carbon source for energy. This carbon source is in the form of carbohydrates that the plant manufactures through photosynthesis. A portion of carbohydrates are excreted through the leaves and roots and provide a quick acting source of energy for soil microbes, especially bacteria that live around the rhizosphere (rootzone).

All organisms have a characteristic carbon-to-nitrogen (C:N) ratio. Mammals, birds, reptiles and all higher organisms have a C:N ratio of around 30:1, i.e. for every atom of nitrogen in their tissues, they have 30 atoms of carbon. Organisms at the bottom of the soil food web - bacteria and fungi - have proportionally more nitrogen. Bacteria, with a C:N ratio of around 5:1, are only 20-30% efficient at recycling carbon, have a high nitrogen content (they are 20% protein), a lower carbon content, and a short life span. Bacteria, actinomycetes and protozoa are hardy and can tolerate more soil disturbance than fungal populations, so they dominate in disturbed rootzones. Actinomycetes are a factor of 10 times smaller in number but are larger in size, so they are similar in biomass to bacteria.

Fungi are generally much more efficient at assimilating and storing nutrients than bacteria. One reason for this higher carbon storage by fungi lies in the chemical composition of their cell walls. They are composed of polymers of chitin and melanin, making them very resistant to degradation. Bacterial membranes, in comparison, are phospholipids, which are energy-rich. They degrade easily and quickly and function as a food source for a wide range of microorganisms.

Fungal and nematode population numbers are smaller, but they dominate the soil biomass when the soil is not disturbed. Fungi have a C:N ratio of 12:1 and carbon use efficiency is 40-55% for mycorrhizal fungi, so they store and recycle more carbon and less nitrogen in their cells than bacteria.

Organisms assimilate carbon and nitrogen from their diet in roughly the same proportions as their tissues contain these elements. Any excess nitrogen is excreted back into the environment. Bacteria, with a C:N ratio of 5:1, have more nitrogen than any other organisms. They are like billions of microscopic bags of fertiliser around your turfgrass roots. When a higher organism eats a bacterium, the excess nitrogen is released back into the environment in plant-available form.

For example, bacterial-feeding nematodes have a higher C:N than their prey, so that in consuming bacteria they take in more nitrogen than necessary for their body structure. This is due to the fact that nematodes have a lower nitrogen content than the bacteria they consume. In addition, the growth efficiency of nematodes (<25%) is smaller than those of the bacteria (> 30%). Therefore, nematodes excrete a majority of both the assimilated carbon and nitrogen that they consumed from the bacteria. Bacteria, on the other hand, usually respire most of the assimilated carbon, but immobilise most of the assimilated nitrogen. Therefore, the contribution made by nematodes to nitrogen mineralisation (making nitrogen available to plants) is relatively high compared to bacteria in soil ecosystems. Nematode excretion may contribute up to 19% of soluble nitrogen in soil, and play important roles in soil nutrient cycling.

There are also some very interesting additional effects on plant root growth when soil bacteria are preyed upon by protozoa and/or nematodes. 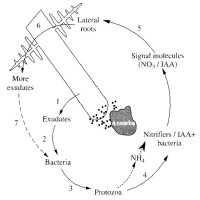 The idea here is that protozoa indirectly influence root architecture by influencing bacterial production of plant growth-promoting hormones. A number of studies show that plants grown in the presence of protozoa develop an extensive and highly branched root system, due to strong branching of lateral roots, and that these effects resemble those caused by plant growth-promoting hormones, such as auxins.

Whilst it has long been known that protozoa can, themselves, release auxins, recent studies reveal that selective grazing by protozoa in the rhizosphere significantly stimulates the growth of auxin-producing bacteria; this has been proposed as the most likely mechanism of protozoan effect on root growth. Changes in root architecture may also be due to other effects of protozoa grazing on the bacterial community. In particular, stimulation of nitrifying bacteria may lead to hot spots of nitrate concentration; as well as being a source of nitrogen for plant growth, nitrate acts as a signal for lateral root elongation and may act to direct root growth towards nutrient patches. Overall, these studies reveal that protozoan effects on plant growth are more complex than previously assumed, in that a combination of nutritional and non-nutritional responses to microbial grazing are at play.

The use of petro-chemical, synthetic fertilisers risks destroying this natural interaction.

Whilst soil microbes can efficiently use moderate applications of inorganic nitrogen accompanied by organic amendments (carbon), excessive rates of applied nitrogen, rather than being cycled through microbial organisms and slowly released to plants, become subject to leaching. Also, when fed a diet of purely inorganic fertiliser, instead of having to rely on microbial sources of plant food, the grass roots excrete far less exudates and there is a decline in the number of soil bacteria and protozoa.

Eventually, soil carbon content may be reduced to a level where microbial populations are on a starvation diet. With little carbon available, populations shrink, and less of the free soil nitrogen is absorbed. This can greatly reduce the efficiency of fertilisation and lead to soil and water environmental problems. To minimise this potential damage to the environment, carbon should be added to all nitrogen fertiliser applications.

Further studies are showing that roots on plants grown purely on synthetic fertilisers, have less root mass than when fertilised with natural sources of nutrients. Now, we understand why.