by Louise Challiss
in Machinery & Mechanics
on 24 Jul 2018

The latest addition to their vast fleet of machinery at South Wales Sports Grounds (SWSG) is a Redexim Verti-Top 1200 from Charterhouse Turf Machinery. SWSG undertake a wide variety of grounds maintenance contracts for a range of clients from local authorities, major contracting groups, universities and colleges through to individual sports clubs and private clients - with no two days bringing the same tasks and demands. 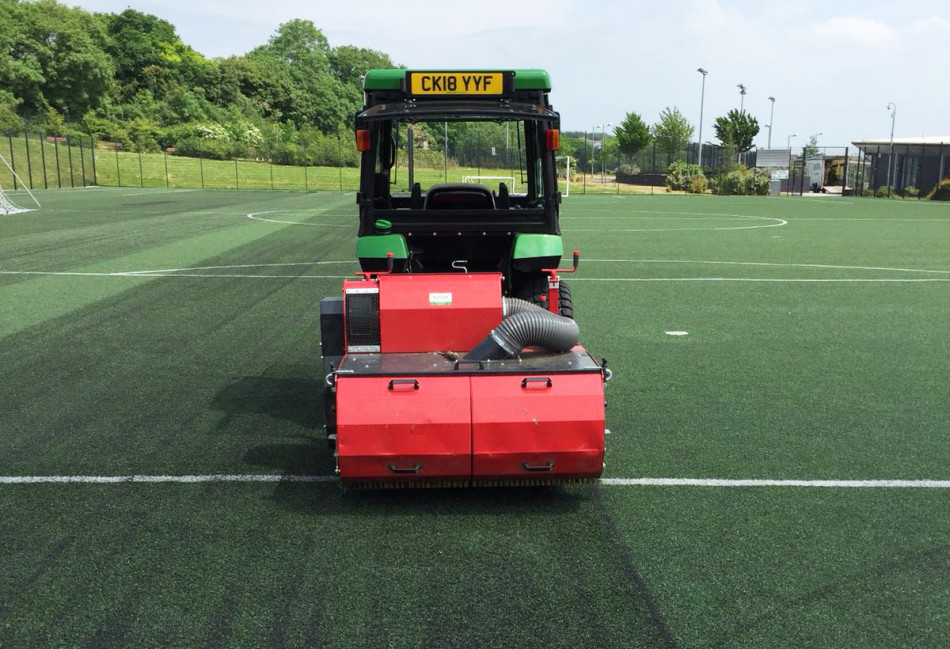 Established in 1964, SWSG has continued to cultivate a reputation as one of the leading sports surface contractors in the region. "The demand for synthetic maintenance, especially with local authorities, schools and sports clubs, has increased to the point where our machinery is in use on a daily basis" explains Construction Director Francis McDermott. "We started to have quite a few issues with our previous machine so decided to have a look at what else is available. We already have several pieces of Redexim equipment for the maintenance of natural surfaces, and recognise it as being good quality, so took a look at their Verti-Top 1200."

The Verti-Top conducts surface and deep-cleaning, utilising a rotary brush to lift the pile and extract up to the top 15mm of infill and foreign material. The infill is then sieved to remove dust and detritus before being returned and brushed into the surface leaving a clean, level and aesthetically pleasing finish. "We looked at a few alternatives but felt the Verti-Top was a better machine all-round", which saw Francis and his team taking delivery of one in March this year.

"Richard Lucas of Charterhouse, together with local dealer Frank Suttons, came over to install the machine. We have one specialist who operates the Verti-Top, and although he's well versed with this type of machine, it was really helpful for Richard to come and outline the key differences. In the relatively short amount of time we've had the Verti-Top we're noticing a better quality of finish, and at 1.2m, its wider working width than our previous machine means our efficiency has also improved."