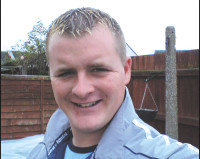 ROBERT Bradshaw is one ambitious young man. His aim is to get to the top of his profession. He played football for his school team but realised that he didn't have the talent to become a professional footballer. So, Rob took, for him, the next best course of action; to work as a groundsman.

Robert works for Huntingdonshire District Council where he maintains 24 football pitches and various other 'green' areas including parks and housing estates.

"I've been with council for five years" says Rob. "My job entails marking out the pitches and carrying out general maintenance. I find the more I do the more confidence and experience I gain. But the council are very 'clock' driven and I don't get the time to look after these pitches to the best of my ability. I find this rather frustrating, I have to say."

"During the 2005-2006 football season I wanted to take this experience and improve it at a 'proper' club, so I volunteered to help out at my home town club, Huntingdon FC. The committee didn't know me or my work so, to get the job, I offered to do it for free. I just love doing the work and knew that I was going to gain valuable experience in my spare time."

"The club had limited equipment - a battered old mower (make unknown), a strimmer and an old-fashioned wheel to wheel line marker. I just about got by with the mower but the line marker really used to cheese me off (polite option) so I 'borrowed' the council's Fleet Kombi. The Chairman soon spotted the improvement and the club purchased their own. In that year I won FA Groundsman of the Year for Step 7 and below, a national highly commended certificate from the FA, the Chairman's Outstanding Achievement Award and Clubman of the Year. During my time at Huntingdon I put in over 1000 voluntary hours."

"I have also worked on the training grounds at Cambridge United, Chester City and Carlisle United and also been involved with the Italian Serie C team, and the England Under 19 Ladies where I was cutting, rolling and marking out the pitches. When you get letters from the FA thanking you for what you have done it gives you great confidence in what you are doing."

"In September of last year I joined St Neots Town FC. I felt I needed a new challenge and, in comparison to Huntingdon, the 'Saints' are a big club with big ambitions - a bit like me! They also have a bit of a budget for machinery!"

"I decided that, if I wanted to make groundsmanship my career, then I had to make a few sacrifices where money was concerned. At the end of the day, as the old saying goes, money is not everything!"

The pitch at St. Neots is rated as one of the best in Cambridgeshire. Bearing in mind over 100 games are played on it each season this is no mean achievement. The club run a 1st team, reserve team and Under 18's, and the County side also use it as their home venue.

"I cut the pitch using a Hayter Ride-on and a Hayter Harrier rotary mower with a collection box and rear roller. We also have a fertiliser spreader and, yet again, a wheel-to-wheel line marker - but this one is a bit more modern and, using Fleet paint, gives us a nice bright line. Presentation is the key to success."

"From July to February we had over 70 games on the pitch and over 55 training sessions! That's an awful lot of wear and tear. I tell the players not to train on the pitch. They get angry with me but it is in their best interests as they are the first to moan if the match day pitch is not in good condition. Until we have our own training pitch there is not a lot they can do though. I tell them that grass grows by the inch and dies by the foot!"

"The weather certainly hasn't been brilliant this season either and, at times, we have struggled. It is not helped by the fact that we are having a brand new, state of the art, stadium built at a cost of £3m. This work is taking place above the level of the existing pitch so, with all the heavy rain, all sorts of rubbish is being washed down towards the pitch."

"The existing ground does have pretty good drainage but it has struggled this year as the drains have, on occasions, backed up on themselves."
"The new ground will consist of three grandstands, two terraces and a main clubhouse area with conference facilities, players and members areas and seating for 250 spectators. As well as the main pitch there will be a third generation training pitch. And, hopefully, all new maintenance equipment! Pop-up sprinklers will be installed and the whole complex is designed to be Conference South standard, such is the ambition of the club."

"As for me, I love early mornings in the summer. I usually get up about 5am and head off down to the pitch. The first thing I do is put the kettle on for a cup of coffee. My younger brother will come with me in the school holidays to help out.... you can always do with another pair of hands! His job usually involves putting the nets down and pegging them; I lift my nets after every game to stop the rabbits gnawing them. He will also put out the corner flags and, whilst I am finishing off the pitch, he will have the kettle on again ready for breakfast. The final job we do is to string out the lines."

"My ambition is to get to the top and, with youth on my side, I think I have made a good start on my career path. I already have PA1/PA6 spraying licence, Level 1 and 2 IOG Certificates for the safe use of Ransomes Triples and Rotaries, and I will be attending Level 3 IOG this year as well as a course on Synthetics."

"I admit that, on occasions, I am not the happiest of guys but, hey, groundsmen spend so much time getting their surfaces into pristine condition and it takes just ninety minutes of football to wreck all our hard work and effort!!"