0 A season of change

A season of change Here we are, nearly at the end of February with only eight more weeks to go to the end of the Zurich Premiership season, apart from the top teams who'll be involved in wildcard or league champions matches. 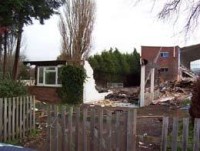 There are also some major redevelopments going on at our ground. We are having a new west stand built, which will be completed in time for the start of the 2005/2006 season. Having a ground that's partly out of bounds as a building site makes for an interesting time on match days. The players are having to use the Richmond College and Cannons Health Club facilities across the road and have a five minute walk from their dressing room to the pitch.

Work started on the demolition of the old west stand and my bungalow on 4th January. The pitch has had to be moved over five metres and the width reduced by five metres to 65 metres. This also meant that new goal posts had to be erected. We've the 18 metres high Millennium posts that have hinged sockets. We also had to disconnect the irrigation pipe work and popup sprinklers on the west side and install new pipe work with six new pop-ups. 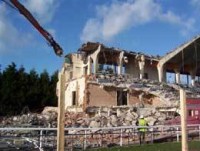 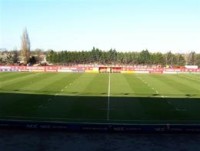 My maintenance schedule has included the divot and repair of the playing surface after each game. By using a drag mat or brush, this operation lifts and stands the grass up and also helps to regain the levels. I then brush with the Dennis G860 cassette system to clear up the debris. I've also been over-seeding and topdressing the badly damaged areas from the scrums.

In advance of a Saturday match; on Thursday I roll the pitch lengthways then widthways to the pitch block patterns then double mark out using the strings. On Friday there is usually a team run out which starts at 9am and finishes at around 11am then the kickers might stay for another 40 minutes. After the team have finished training, my assistant and I quickly walk over and divot, repair and rubber rake the grass where the team have practiced their line- outs. I then lightly roll the pitch using the John Deere triple mower, going widthways across the pitch. This is a quick and easy method for presentation after team runs, which helps in firming the surface without over compacting the top. We then re-mark, usually free hand to touch up the pitch markings.

Sponsors logos also have to be painted in, dugout matting laid out, flags and post protectors put out. 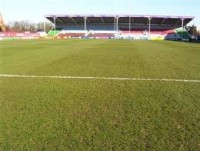 November using 15 bags of Scotts invigorator. I got Paul Boatman, my Rigby Taylor rep to take some soil samples for testing and the results were fine, lacking mildly in potash and magnesium and the PH was good. Unfortunately there hasn't been a good time to apply any fertiliser, but there's no rush. My next first team game isn't until 13th March.

In the New Year I was able to verti-drain the pitch during a three-week window without fixtures. This kept the surface open and allowed air into the rootzone.

Just before Christmas I finally found an assistant, Andrew Caldwell from Durban in South Africa. He's a very enthusiastic young man who's very keen to learn about Groundsmanship. He'll be with me for a year. 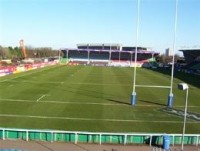 My thoughts have now turned to renovations and what I'll be doing at the end of the season. When we were digging out the holes for the new post sockets I noticed that in the verti-drain and the solid tine holes the grass roots were in abundance, filling the holes. However, 100mm down into the rootzone there is still a 'capping' that needs to be alleviated. I am thinking about using the Earthquake or a Twose to try and break up this compacted layer.

Before Christmas NEC Harlequins acquired the lease and moved to Roehampton to use Wimbledon F.C.'s old training ground by Wimbledon Common on the A3. We've moved our offices down there temporarily while the west stand is being developed and at the end of the season all the club's teams will move from Aldershot to use this as their training facility. I'll be down there myself in the coming weeks to put in four sets of goal posts. The maintenance of the Roehampton pitches is carried out by existing Groundstaff who come part of the lease agreement.

With the new stand being constructed it's an exciting time for the club and it's good to be a part of it. However, the threat of relegation makes everyone uneasy. I've been there before at Leicester City, new stand…relegation…redundancy! Fingers crossed that lightening won't strike twice!