4 A season so far at Tividale Football Club

A season so far at Tividale Football Club 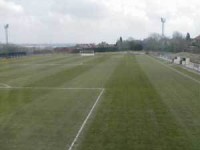 As we all know weather-wise we have had a pretty good season. My pitch has done remarkably well considering that by the end of the season it will have hosted in the region of 100 games. At present I have only had five postponements. Tividale FC and Dudley FC have lost one game each whilst our Sunday league side, Oakham, have lost three.

Halfway through the season it was decided that our Youth team would fold. I have to say that, at the time, my initial reaction was that at least there would be fewer games. However, they didn't have that many games in their season anyway and they didn't use the pitch to train all that often.

Only Tividale FC are allowed to train on the pitch which can mean that it is used on Tuesdays and Thursdays as well as Saturdays and Sundays. On a few occasions this season I have had to have words with the manager regarding the training sessions and also the warm ups before a game. A lot of the damage caused to the pitch has been done in these sessions. Quite often it is the norm for players to come out at about 2 o'clock to warm up and also at the end to warm down.

Dudley Town FC who share the pitch have decided to leave at the end of the season to play elsewhere. Apparently, they have a star player who they reckon will play better on a better quality surface. This is a tongue in cheek comment by myself but that is what they went to print with. Again, my initial reaction was less games next season. With this in mind, people have been telling me that the pitch should be immaculate next season. In theory, it should be better. However, I tell people that I won't put my neck on the block, as it were. I would guess that the players will think it ok to train more often on the pitch. Weather conditions next season may be less favourable than this season. Who knows?

Although the pitch is a lot better now, it still is not up to the standard that I would like. I recently had a visit from an ex Chairman, Derek Beasley, of a nearby football club who have a reputation of keeping a first class surface at his own club. He told me that he could not remember seeing the pitch in such good condition. This was a very pleasing comment from someone who I have a lot of respect for.

Admittedly the pitch does look better from a distance. It is very thin in places though, due to excessive use. I have to say though that it looks better now after 86 games than it did when I took over looking after it around three years ago. It was absolutely awful. At that time there was hardly any equipment to use on it. Excessive use of the roller was the norm.

Since then I have been fortunate to have been able to convince the Chairman and the Committee to invest in machinery. They have seen the improvements and have been willing to co-operate with my requests when able to do so. Don't get me wrong, the Club doesn't have a bottomless pit of money to dip into. I do only ask for equipment that I will use and I know will benefit the pitch. From the days that all I had was an old 36 inch mastiff and a marker to use, along with borrowing marking out strings, I now have the following:

The Sisis Powaspred top dressing unit is a recent addition to my kit along with the spray jet marker. The Club purchased these from Derek Beasley whom I spoke of earlier. This was by pure chance. He phoned we one day to ask if I was interested. I told him that I would speak to our Chairman, Don Aston, and get back to him. After working out some figures for Don, I showed what savings we could make on contracting costs that could offset the cost of the dresser. After looking at the figures he agreed that it would be a sound investment. Although the Club won't be saving all that much this year it will be a cost saving in years to come as we can carry out this task ourselves.

Contractors can be invaluable but I felt that I would like to carry out most of the tasks myself. There are undulations on the pitch that hold water. I use the term saucer shaped to describe these areas. Initially, I thought that these areas were where the drains weren't working properly. However, last years drought conditions showed up the drainage system in its entirety and it became evident that these saucer shaped undulations lay in between the drains. With the help of the top dresser I can bring back the levels of the pitch so that surface water problems can be overcome. That's the plan anyway!

I would like to add here that my preference is Sisis equipment. At my previous Club I had the use of a range of Sisis equipment and found them to do a great job.

I am on the lookout for a seeding machine to complete my "wish list". I have posted a request for such equipment on this website but, as of yet, there has been no response. This will enable me to carry out virtually all works needed to the pitch apart from subsurface decompaction with the use of a vertidrain or Earthquake. Ultimately it will also help lower future contracting costs.

Between now and the end of the season I have a period with eight games in ten days. My end of season renovation work has been put back by nearly two weeks. Initially, I was told that there would be no more games after the 10th of May. This has now been changed and there is a strong possibility that I cannot begin work until the 22nd. To most people at the Club two weeks mean nothing. To us Groundsmen though two weeks is a lot. My first friendly last season was on 15th July. If it is the same next season this will mean just seven short weeks from renovation to the first kick of the ball. Add that to possible drought conditions similar to last year and the pitch will be in trouble. I will just have to cross that bridge when I come to it.

My plans at the moment are as follows:

My idea is to get the top dressing on before decompaction begins so that the operating tines will force the dressing into the profile of the surface. It will then be a case of mowing and irrigating as and when necessary.

I would like to add that all the above has been approved by the Chairman and the Committee. I feel that it is vital that communication is effective between the Groundsman and those that dip into the finances. I am fortunate in that my employers listen. They can however see the evidence in how the pitch was prior to my employment and how it is now.

On a final note I would like to share with you something that was said to me at the Club only the other night.

One of the players is turfing his garden with good quality turf. He told me that he was going to hire a whacker plate to firm the surface and was then going to turf it. I told him that this was totally the wrong thing to do. We were having a pint at the time and I used the table to point out a fact to him. I said that if there was an inch of soil on that table, how far would the roots of the new turf go? He thought for a while then told me he was cancelling the whacker plate the next day! I told him that the problems that I inherited when I took over the pitch were brought on by the overuse of rolling which just compacted the surface. He also asked me how did I manage to put the stripes into the pitch without using a mower. He was amazed when I told him that it is sometimes better to use the brush as opposed to using the mower. My Sisis dragbrush has been an absolute God send. It not only removes wormcasts and raises the grass for cutting, but also fools the players into thinking the pitch is better than it actually is!!

The photograph of the pitch shows the results of two hours of brushing.