In recent years there has been an upsurge in a serious tree disease called Sudden Oak Death (SOD). The name derives from the fact that it was first identified in the early 2000s, in California, USA where it was resulting in the sudden death of their Pacific Oaks. 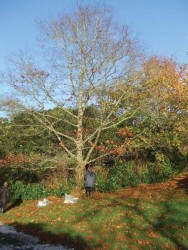 The disease is caused by fungus like organism called Phytophthora ramorum. Around about the same time the same pathogen was identified in Europe, mainly associated with dieback on rhododendron.

P. ramorum can infect many rhododendron species, but Rhododendron ponticum is particularly susceptible. The symptoms of the disease on rhododendron include an aerial dieback. Infected shoots have brown to black lesions which normally start at the tip and work backwards. Cankers can also form on the stems. On diseased leaves there is a blackening of the leaf petiole extending into the leaf base. Irregular dark leaf spots may develop, often occurring near the leaf tip. P. ramorum forms reproductive structures called sponagia on the surface of infected plant tissue. These are dispersed by rain splash and air currents to infect new plants.

Rhododendron is the most common host for P. ramorum, although it does have a very wide host range including well over 100 plant genera. Susceptible woody hosts include Viburnum, Camellia, Kalmia, Pieris, Syringa, Laurus and Vaccinium. However of much greater concern is the ability of P. ramorum to infect woodland trees such as oaks (Quercus spp.) European beech (Fagus sylvatica) and sweet chestnut (Castanea sativa). Symptoms of infection have been observed on all these, mainly in the south-west of England and Wales. 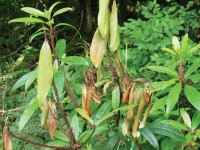 In the early days the pathogen was most frequently found on plants in nurseries or garden centres. Nevertheless, P. ramorum infections have occurred at several sites in England and Wales as well as in N. Ireland and the Republic of Ireland

In late 2009 in England P. ramorum was identified as the causal organism of the dieback of large numbers of Japanese larch (Larix kaempferi). The pathogen appeared to be particularly aggressive on Japanese larch, resulting in death of mature trees. It was the first time that the pathogen has been observed infecting and sporulating actively on a commercially important conifer species.

In August 2010 the disease was diagnosed for the first time in Northern Ireland on Japanese larch in two public forests and a private forest on the Antrim plateau. There have been a small number of incidences in forests in the Republic of Ireland in the Tipperary/Waterford region

Because P. ramorum is a non-indigenous pathogen and has the potential to cause loss of many plants, an eradication programme has been put in place. All infected plants are removed and destroyed by burning or in deep burial. The major foci of infection in Great Britain have been in the south west of England and in Wales. Hundreds of hectares of larch woodland have been felled. In N. Ireland, since August 2010, almost 150 hectares of infected Japanese larch have been felled.

What should you do? 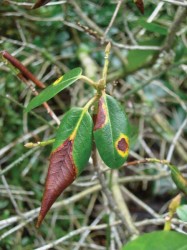 If there are rhododendrons, vibernum or Japanesse larch on you golf course examine them regularly for symptoms of P. infection. P. ramorum in a non-indigenous pathogen and, if you suspect that you have plants which are infected, you are required to inform the relevant plant health authorities in the Forestry Commission, the Department of Agriculture and Rural Development NI or the Department of Agriculture, Fisheries and Food, ROI.

More details about Phytophthora ramorum and SOD, its symptoms and control can be found at: