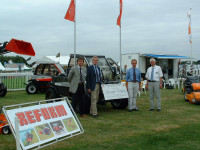 Visitors to the Reform stand at Saltex 2006 had the opportunity to see a wide selection of bank mowing machinery where staff were on hand to discuss user and cost-benefits associated with the Metrac 2004, G5 and the hydrostatic-drive H4 plus the 95hp, 3litre turbo driven Mounty 100 and the M14 pedestrian bank mower complete with one metre flail.

Also on view was the 200,000th Reform machine produced to date, which happens to be a Metrac H6 Bank Mower presented on the stand in special celebratory Silver livery.

The Reform range is supported in the UK by a state of the art spares delivery service and national dealer network backing up an increase in sales into the UK Contractor and Local Authority sectors.