A similar work schedule for both Bowls and Croquet. 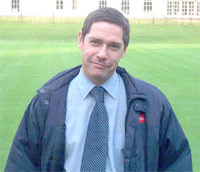 We tend to cut the greens and lawns every other day as well as before any match. The bowls are

Both the bowls and croquet surfaces, were maintained at a height of 5mm in the early summer, but we host a major croquet tournament mid summer at Hurlingham. To speed up the lawns we dropped the height of cut to 4mm, a height that we have retained on both sports surfaces now for the rest of the season.

Our winter cutting height for the bowls greens and the croquet lawns is usually set no higher than 8mm. I'd like to leave the grass a little longer, but the proximity of the river Thames and the slightly warmer climate in London would encourage a micro-climate within the sward to harbour disease.

While there have been no major problems to report, other than the continued heat, from this fantastic summer, I have a continual fight on my hands with the city foxes. They seem hell bent on digging up the greens and lawns, and we have to follow them around, diligently repairing damaged areas.

We are hoping to get the renovations for both the bowls greens and croquet lawns finished by the end of September this year. In the past, these areas have been kept open into October, if the weather has been conducive to play. I have felt for a while, particularly using fine grasses (bents and fescues), that seeding late provides a poor return for the following season.

This years earlier renovation should enable the new grasses a better opportunity to germinate and establish themselves before the on-set of winter. There are two bowling greens, which is a little bit of a luxury, considering that there are only around 30 active bowlers with the club.

One of the greens (No2) is being reduced in size this year, to accommodate some new landscaping. All of the matches are played on the No1 green, which is the older of the two greens. The sward on both greens is predominantly made up of Poa and bents; there is very little fescue in them. Obviously the major problem with such a high content of Poa is the high susceptibility of fungal attack. We seem to always be under attack from fusarium, mostly in the autumn and early winter.

Hurlingham hosts a big bonfire and firework night every year, the fall out from the fireworks, in the form of little cordite balls, used to cause real problems on both the croquet and the bowls surfaces. I couldn't understand initially, what all the little 150mm diameter dead patches were, until I looked closely, and found a small dissolving purple ball in the middle of each patch.

Once I realised what the problem was, we became pro-active, and covered the immediate vicinity with plastic sheeting to catch these little pellets. However the minute that you cover the greens, even for just one day, in mid November, disease is encouraged and becomes rife. Before the covers go down I spray the greens with a systemic fungicide to try and curb the imminent onslaught.

In the past, as I said, a late October renovation hasn't been ideal in establishing bents and fescues on the playing surfaces. Even when new seed has germinated, it has then struggled to make any real impact in the overall composition of the greens. Unlike the tennis courts and cricket square I can't take a machine such as the Graden to the bowls greens and croquet lawns and just rip them apart. Historically a late renovation has also made it difficult to be very severe with any type of scarifying operation and still be able to produce a decent surface and sward in early spring.

This year, the earlier renovation start, should enable us to clear the sward out more effectively. Once the areas have been scarified and brushed clean of debris, we will over sow with the Proseeder and then top-dress.

I use a Rufford's 'off the shelf' top-dressing mix that is compatible with our existing native soils. The surfaces have had a regular light dusting of dressing on a monthly basis, throughout the season. On average we will put about 40 x 25kg bags of dressing on during each application, following aeration. The dressing doesn't take long to be brushed into the surface. At the end of the season we'll put about double this quantity down, straight after seeding.

The first job for renovation will be the employment of our Sisis Soil Reliever. I'll use this with minimum heave, to a maximum depth. This operation is more useful from an air movement and drainage point of view, than alleviating compaction, which isn't a major problem to us due to our existing and regular aerating programme.

The surfaces will then be scarified using Huxley machines, but I make a point of doing the work on the greens with a brand new set of blades, this way we get a clean cut and not a ripping effect. On fine grasses this is an important factor more so than on a rye grass sward. Worn, blunt blades tend to tear the surface, particularly on a sand based surface. With this operation we will only get into the surface a couple of millimetres to clear any immediate surface debris.

The biggest benefit I find during renovation is hollow coring. I use a set of cluster hollow tines on a Groundsman machine. The depth that the tines enter the green is only set at about 10-15mm. These tines are set so close together that any deeper and they would just rip a green to pieces. The tines punch out literally millions of small holes and this operation is the ultimate thatch remover. This also provides the perfect seed bed where the seed can fall into a perfect depth hole.

Once the cores have been cleaned off each green, we will then probably aerate with 10mm solid tines to a depth of 100mm, prior to seeding with the Proseeder and the spreading of the top-dressing. Finally all the dressings will be worked in to the holes and the greens will be irrigated as necessary to help kick start the seed in the summer-warmed soil.

With the top-dressing ameliorated and the new seed grasses establishing, I may contemplate using the Soil Reliever just prior to Christmas, opening up the ground to a depth of 200mm to help with the wetter weather.

In the winter we aim to aerate these areas at least monthly if not fortnightly, subject to conditions. I tend to use different machines for aerating to vary the depth of spike. One of our machines is a very old Pattison motorised sarrel spiker and we'll get this out to spike occasionally as it provides fantastic surface aeration.

Mowing will continue on an 'as and when basis'. We will probably be topping the grass twice a week up until November, then weekly in December and January, unless of course, we have a cold snap.