by Rosie Duckworth
in Industry News, Machinery & Mechanics, and Golf
on 29 Aug 2015 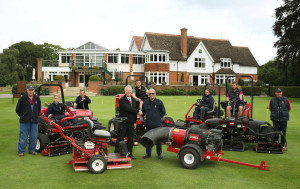 In that time the club has been awarded European Tour qualifying three years running, hosted the annual PGA EuroPro Tour, recently staged the first England Golf 'Golf Week' festival and regained its ranking as a top 100 UK course. And things show no sign of slowing down. Next year the club has been awarded the honour of hosting the Regional Qualifying for the Open Championship.

Course manager Sid Arrowsmith, who has been at the helm of Frilford Heath since 1994 and is one of only 61 BIGGA Master Greenkeepers, has recently taken delivery of a new Toro Groundsmaster 4500-D, Reelmaster 3100-D Sidewinder, two Greensmaster 3150-Qs, a GreensPro 1240 and a ProForce Debris Blower, and says the quality, reliability and flexibility of using Toro has helped create a course worthy of this attention.

"We have a talented team working here of six greenkeepers per course and giving these guys Toro to work with has enabled us to produce three courses of championship quality," he says.

Sid finds the advantage of being an exclusive Toro customer in being able to plan machinery replacement around the club's objectives on a yearly basis. For example when the team focused their efforts on regaining ranking in the Top 100 Courses in the UK they wanted to make specific course changes such as building new tees, putting in new bunkers and producing better performing greens. The club's machinery choices around that time were based on this.

And this year's choices are all about further improving that ranking and attracting more members, visitors and tournaments, says Sid.

"Every year our machinery choices further enhance our existing fleet enabling us to continue strengthening our position in the market. In particular the new GreensPro stands out. You can see it's a brilliantly engineered product. Our greens do run firm and fast and this will maintain that. The two Greensmaster 3150-Qs are delightful. We didn't choose them for the fact that they're quiet, that is an added bonus to their cutting ability."

The Directors at Frilford Heath Golf Club signed up to exclusivity with Toro to strengthen the club's reputation and that, coupled with the its continuous investment in people which includes on the job training and clear career progression, has seen the club easily achieve that aim. As Sid concludes: "It's been a winning formula."