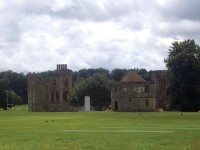 Nestled in the medieval village of Midhurst, and bordering Cowdray Park polo club, is one of the gems of Britain's local cricket tradition.

The protected Tudor ruins of Cowdray House set a striking backdrop to Midhurst Cricket Club in West Sussex - surely one rivalled by only a handful of grounds.
No surprise then to learn that Midhurst was voted one of the loveliest cricket grounds in the country by Wisden, the game's Bible - pipped for top county honours only by Arundel Cricket Club, which sits in the grounds of the internationally renowned castle, the home to the Duke and Duchess of Norfolk.

Picture postcard scenery aside, the task of maintaining a village cricket square is not an easy one as budgets and, more importantly, time are factors that ground staff often don't have at their disposal.

Despite its somewhat isolated location, Midhurst enjoys a large membership with three Saturday league sides playing in the Hampshire Cricket League pyramid and the County Division 1; a Sunday league side and two evening sides who play in a local mid-week league, as well as a thriving youth section made up of juniors as young as six.

With such a packed programme, regular maintenance is crucial to keep the pitch intact. The man in charge of the - some would say thankless - task of ensuring Midhurst's square does justice to its stunning surroundings is 49-year-old Peter Glass. 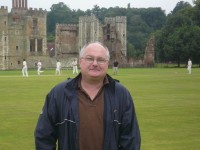 Currently in his twelfth year in the post as voluntary head groundsman at the club, he has now become the first man in the club's history to take up the position permanently.

"The ground was in a reasonable state before I joined but, since I've been working at it regularly, we've seen some marked improvements," Peter states, "especially over the last couple of years. I try to spend at least 14 to16 hours a week, doing a little every day if I can."

Peter began his career working on a voluntary basis maintaining the sports pitches at Chichester Hospital in West Sussex, developing his avid interest in greenkeeping after relocating to the cathedral city in the 1980s.

He moved to Midhurst in 1996 where he became involved with the club almost immediately, captaining the second XI for three years and holding the post of club chairman between 2004 and 2006.

Upon taking responsibility for groundsmanship, Peter came up against a familiar scenario for all voluntary staff - elderly machinery and little, if any, maintenance budget. "Some of the kit was more than 35 years old," he recalls, "which made my job a little tougher. We have no real budget so any new machinery we want has to be bought with money we've either applied for through the English and Welsh Cricket Board (ECB), or from money that we can raise ourselves."

To date, Peter has performed splendidly, managing to raise between £80,000 and £90,000 for the club, a tidy sum that has helped them make much needed purchases and undertake essential maintenance work.

The appliance of science may well be today's watchwords in turf management but Peter stresses that there is definitely an art to nurturing a pitch with limited time and money.

"It's all down to doing the right things at the right time," he reveals. "I'm very much part of the old school, sticking to what I know works best." He remains sceptical about the growing scientific emphasis to the job. "I feel it can be over complicated," he argues. "In my mind, there's little substitute for experience in this business."

One of Peter's former day jobs was as a director of a UK charity, a position he believes has helped him greatly in sourcing funding for the club. The ECB's machinery fund is one such avenue, designed for smaller clubs to apply to for financial support.

But it's not always an easy route. "The only problem is the tortuous and time-consuming process you often have to go through to get the money - time being something that voluntary staff don't have much of."

Groundsmen in a similar position should always pursue different avenues and, most importantly, seek advice from their peers, Peter urges. "The really good aspect of this industry is that people are always willing to offer advice about what works for them. No one grows protective about their methods. A little push in the right direction can be a great, and potentially, cost-saving help."

Midhurst were lucky enough to be the beneficiaries of a grant from the Spen Cama Association, a fund available to clubs in Sussex as a bequest of the millionaire who died earlier this millennium, and one that has helped smaller concerns afford machinery purchases and maintenance work.

"Sussex clubs are lucky to have recourse to this fund but there should be more options like it available," believes Peter. "Machinery isn't cheap after all."

Knowing how to put your club in a strong position to apply for funding is the hardest aspect of the process, he adds. "It's part of the job of the ECB to make sure money goes to the most worthy causes."

Achieving ECB accreditations, such as Clubmark and Focus Club, is a significant step forward in applying for funding, he says, and Midhurst have gained them in part due to their strong youth focus.

Financial support received from the Community Cricket Development Fund, also arising from Peter's persistence, helped pay for necessary maintenance work such as irrigation and koroing back in 2007, he explains.

"We needed support to carry out these larger jobs, and the koroing is definitely something I would consider doing again. The problem for a smaller, less frequently maintained, club like us is that, unless you have a good solid loam base, koroing can take a lot off the top. Despite this, the job was a success and the pitch played much better the following year."

The condition of the pitch has witnessed a marked change since 2006, the club's bicentenary year and the most successful since Peter came on board. The visit by Lashings Cricket Club to play a special one-off match drew in record numbers and much-needed revenue to bolster the maintenance budget. "It was the best day since I've been here and was a real treat to see veteran players like Richie Richardson and Phil Defreitas, as well as being a great way to raise money."

Being geographically distanced from other clubs in the county (it is positioned close to the border with Hampshire) has not affected the village club, Peter says, but instead has allowed Midhurst to draw members from a wide catchment area - an opportunity the club started to push a few years ago.

"We realised the potential to draw in a lot of kids interested in cricket from a wide area," says Peter. "On a Friday night for example, we attract 200 kids for practice sessions, with ages ranging from 6 to 16, whilst also running an academy in the week, hence the need for the pitch to remain consistently in good nick."

With some of the revenue generated over the last twelve years, Peter has been able to make vital purchases to replace dated machines long past their sell-by date.

"Primarily, I use Allett Regal mowers for the outfield and an Allett C20 to cut the strips. The C20 is a great machine for us as the many different cassettes mean we can use it for a number of jobs. Generally, we use the cutter, brush and groomer, sometimes only brushing to give the turf a break."

"I will usually gang mow in the early season with our Ransomes trail gangs," a machine he has found to be well suited to their needs. Peter plans to make further upgrades this winter, stretching his budget as far as it will go without sacrificing quality.

"We really need to update our netting this winter, so that's our main priority." On such a tight budget, Peter may be unlikely to satisfy his machinery requirements, yet, as he jokes: "There's no harm in having a wish list - the Sisis 600 scarifier, a new roller and a trailer-mounted aerator are my top three!"

Peter has learned that investing time and quality are crucial elements in keeping a pitch of any standard in top condition, factors he experienced first hand last winter after a less than perfect programme of overseeding the season before.

"It was simply not good enough," he declares, "and led to disease developing on the square over the winter."

Plans are underway to rectify the issue, including a thorough programme of square repairs, including cutting, heavy scarifying and aeration. "After the foundations are properly laid, we've planned an overseeding programme using BAR Gold from Barenbrug. We've used their products for six years, since moving away from Rigby Taylor - a company I believe have priced themselves right out the market. Barenbrug products are well priced and we've had nothing but good results from them so far."

Minimal budgets and time constraints aside, Peter is more than happy with his lot, preferring to focus on what he and the club have managed to achieve over the last decade and more. "You forget just how much you're progressing when in the thick of it. It sometimes needs someone to come in and ask you to dissect you own work to really see how much things have changed. So, thank you Pitchcare, for that."