0 A trail of trials at Ipswich Town FC 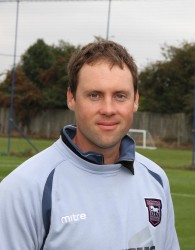 Ben Connell was appointed as the Head Groundsman at Portman Road, the home of Ipswich Town Football Club, following Alan Ferguson's move to the FA's St George's Park facility. "I know I have some big boots to fill," says Ben. "Alan won so many awards for the quality of his pitch and achieved an awful lot here, but I'm looking forward to the challenge. I've known Alan for a few years and he's always been there to answer a question and offer advice. He's a top man."

"My main priority is to continue to provide the standard of pitches that the club has come to expect. There's a good team of groundstaff here and I'm confident we can maintain the levels required."

Thirty-two year old Ben has always worked locally in the industry, most recently at St Joseph's College, where he spent six years prior to his move to Ipswich Town.

Ben has five full time staff and two apprentices. Matt Davies and Tim Walker are largely based at the stadium, whilst Nathan Scarff, brothers Andrew and James Cubitt and apprentices, Tom Grafen and Sam Smith, work at the training ground.

All the training pitches and the stadium pitch are soil based; in fact, Portman Road has hardly changed since the 1930s.

"Alan spent fourteen years developing both sites and investing in equipment to do the job properly," explains Ben. "The sheds are packed with equipment, not only to carry out the regular maintenance regimes, but also a full range of renovation equipment that includes fraise mowers, topdressers and seeders. There is so much equipment that there is not nearly enough room for it in the sheds!"

Ben spends the majority of his time at the training ground in nearby Playford Road, organising and planning work schedules. "I'm happy to leave the daily maintenance of the stadium pitch to Matt and Tim," says Ben, "but I do oversee work is completed and arrange feeding and aeration programmes."

"The pitch is cut on a daily basis using our Ransomes Mastiffs and Matadors. We've been cutting at 24mm, although we are considering whether to raise it to around 27mm during the winter months to give the grass more chance to recover after matches. All the training pitches are maintained at 24mm though."

"We also brush and verticut on a regular basis to keep the sward standing up and allow air circulation around the plant."

At the training ground, the team operate an ongoing rota system of renovations, with one or two pitches getting the full treatment of fraise mowing, topdressing (60-100 tonnes per pitch), vertidraining and overseeding, whilst the remaining pitches get scarified using the scarifying reel in the Koro Top Field Maker, top dressing (30 tonnes), Koro Dresser Recycler, hollow coring, breaking cores/cleaning, levelling and seeding."

"Aeration is our key operation," says Ben. "With all the pitches being soil based, it is imperative that we keep them as open as possible, so a regular deep aeration is carried out every three to four weeks. Deep aeration is either with a borrowed verti-drain or by using a local contractor, Bill Ellis."

"They are also 'earthquaked' twice a year; once in the spring and once in the autumn. I've also enlisted the help of Terrain Aeration to help solve a drainage problem on one of the pitches. A small area of the pitch was staying wet for long periods, so the object of the exercise was to see if any deep aeration would solve the problem. Terrain drilled a number of holes at two metre spacings, down to a depth of one metre, and then blasted the soil with air at 150 PSI, before backfilling the hole with lytag drainage material. It's early days, but there appears to be some improvement."

"We are fortunate to have Ransomes Jacobsen on our doorstep, and they supply all our mowing equipment through a package that works for both parties, with the company able to show clients around the facilities and have a corporate box for match days. We also have a close working partnership with them, sharing ideas and issues that we may have."

"Preparation for match days is centred around fairly intense mowing," says Ben, "when double cutting is carried out on three consecutive days, including match day itself. It's part of Alan's legacy for pristine presentation, and one that we will continue."

"The pitches at the training grounds are cut using Jacobsen triple cylinder mowers, collecting the clippings. It usually takes half a day for the team to cut all the training pitches."

"Over the past six months we have been trialing different line marking paints and markers. We have decided to go for Impact Gold as I believe I can make a saving on paint, plus I have found the lines don't tend to ghost on the pitch when cutting and brushing. At the stadium we have transfer wheel linemarkers and Stadium paint."

"There are no pop-up watering systems in one of our fields," bemoans Ben, "so it's simply a case of getting the hoses and self-travelling sprinklers out. It's pretty time-consuming and we usually spend long hours overseeing the watering programme. In the other two fields we have a semi-automatic system, having to pull two inch hoses in to the centre of the pitches. In some respects, this has been a good year, as all the rain we have had has reduced the need to irrigate, so we have saved lots of time and money. It's very rare to get the rainfall we had in 2012. East Anglia is usually parched every summer!"

Another trial being undertaken is on seed performance. "Nathan has set up a grass trial plot area at the training ground, sowing a number of different seed mixes which have all been kindly donated by the manufacturers. Limagrain MM60, Everris ProSelect and Barenbrug BAR7 RPR perennial rye grasses are amongst the seeds being put through their paces."

Nathan and Ben wanted to bring into play a new training area, making use of one of the old sports club's bowling greens. "It seemed a good idea to conduct the seed trials here to see how the mixes stood up to the rigours of intensive training. We split the area into several plots with one of the selected seed mixes in each. The whole area will be treated exactly the same as the pitches and Nathan will be monitoring how well they perform in terms of wear tolerance, colour, vigour and disease resistance. Again, it's early days, but I think it's great that my young team are getting involved in these trials."

And, if that wasn't enough, Nathan, Matt and Tim are currently trialing the Qudos LED lighting system at the stadium. "Nathan heard about the trials at Leicester that Ewan was undertaking, so he got in touch with Mark Raper at Qudos Growth and asked if he could trial the lights as well. Mark was obviously keen to get more testimonials for his system and, before you could blink an eye, the rig arrived. It's still a prototype model. Our one consists of fifty-four LED strips and currently operates at around 0.9Kw. The LEDs are focused between 440-460nm (blue) and 650-670nm (red) between the PAR (Photosynthesis Active Region) spectrum of 400-700nm."

"I like the fact that the lights can be programmed to come on at set times, have a sunrise and sunset programme, and the wave length of the red and blue spectrum can be altered to offer different growing strategies."

"The height of the lights can also be raised and lowered, by remote control, between 500mm-1000mm. Another feature I particularly like is that the rigs to be moved remotely with the onboard battery powered motor. We can set it predetermined times to prevent yellowing of the grass under the wheels.

"We've used the rig to assist grass growth in the shady areas of the pitch and goalmouths, and we've been pleased with their performance to date. The ability to be able to plug straight into the mains also makes the rigs more attractive as the club won't need to invest in three phase electricity points, and we won't have to drag large cables around the ground!"

"As LED uses less energy, the cost of running the rig has been equated to be ten times cheaper than sodium lights, based on current costs. If that turns out to be the case, then they may well be within the club's means, especially as we have saved considerable money on irrigation over the past seven months!" 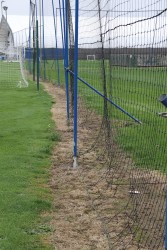 Ben is keen to improve his facilities, but realises he needs to go out and see for himself how and what other groundsmen have achieved at their grounds. "Coming from a schools background, I have been pleasantly surprised by the attention to detail here. Over the coming months, I'm hoping to meet up with several head groundsmen to help me to decide on the best way forward."

"For example, we have very old ball stop netting posts that are in need of replacing, so I'd like to see what other systems are available, and see how they are deployed and maintained at other clubs. The grass under our netting is difficult to maintain. Currently, it is sprayed out, but that tends to look unsightly. Basically, I want to improve the aesthetics of the training ground and ensure that the whole site is maintained to a high standard."

So, does he have a wish list? "Yes, as well as the lighting rigs for the stadium, a 3G outdoor training facility would certainly take the pressure off the grass pitches, whilst a fully automated pop-up watering system at the training ground would save a huge amount of our time, so that we can concentrate on other areas."

It is always pleasing to see groundsmen prepared to try out new materials, products, machinery and methods. Whilst Ben and his team have a clear plan of where they would like to be in five years time, their targets can only be achieved by good record keeping, monitoring and reporting on the performance, success and, sometimes, failures of activities undertaken.

Ben has certainly taken on a fascinating challenge, but I am sure he will put his own markers down and take the club into the next phase of grounds improvements in the coming years.