Hayden Turfcare's Richard Hayden has been the official consultant at Zenit Saint Petersburg's Krestovsky Stadium since February 2017. In this article, he discusses the challenges faced to bring the pitch up to standard for the 2018 World Cup. 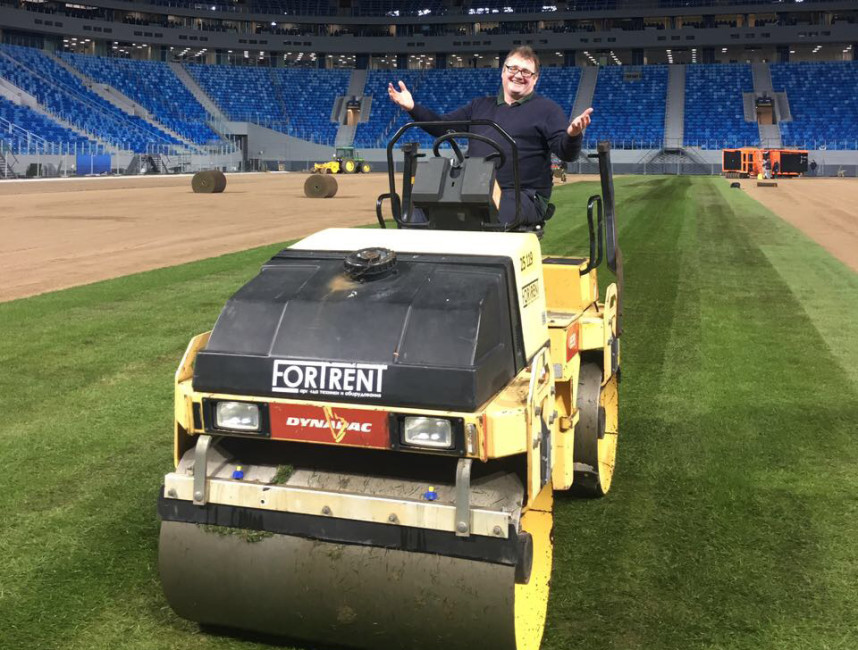 My adventure in Russia started in 2009 with a commission for UEFA to recover some pitches for the Champions League at the time. The harsh Russian winter means that pitch problems in February are likely. Since this time, I have been employed as the official consultant to Zenit Saint Petersburg in Russia.

The club, founded in 1925, are one of Russia's most successful clubs with a cabinet of silverware earned in Russia and Europe. My role involves the provision of consulting and advice over four sites, including two stadiums and two training sites, with twelve pitches in total under the direction of General Director Vladamir Litvonof.

This article covers the challenges faced and overcome in the new Krestovsky Stadium. 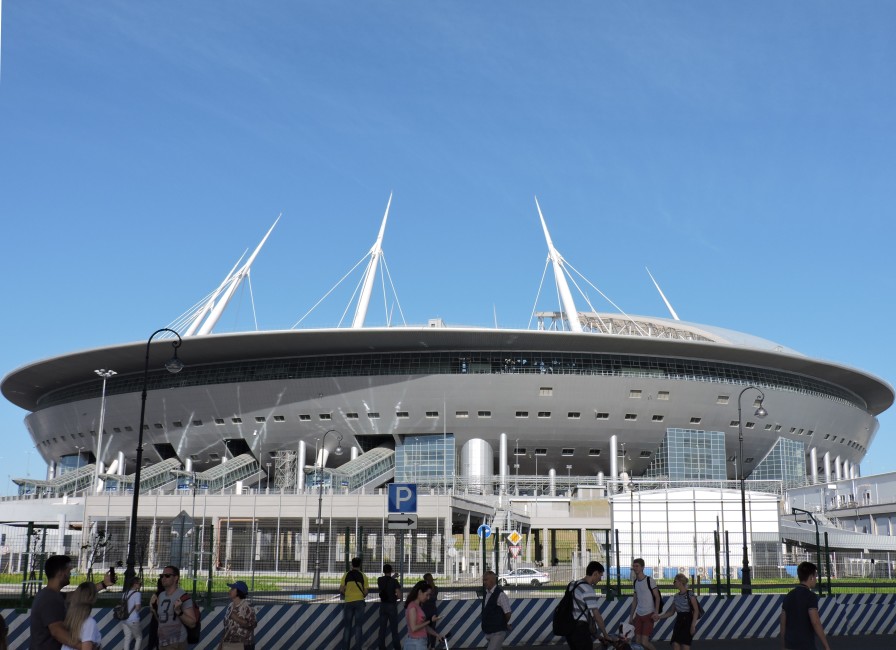 The Krestovsky Stadium - officially the Saint Petersburg Stadium, but also known as the Zenit Arena - is a similar design to the Toyota Stadium in Tokyo, except much bigger. The pitch is a rolling structure which facilitates its movement in and out of the stadium, allowing the surface to receive sunlight and air when not in use. The stadium can also then be used for concerts etc. without damaging the pitch.

The roof is retractable, but the level of sunlight available on the brightest day of the year is a fraction of other stadiums I have worked in. Even in mid-summer, sunlight levels are about 20% that of a large stadium such as Croke Park. Initially, due to technical reasons, the pitch movement mechanism was not used. This led to two pitch failures in 2016, and again in 2017. Even with full supplementary lighting systems, the lack of air movement and sunlight present the most extreme environment to grow grass. 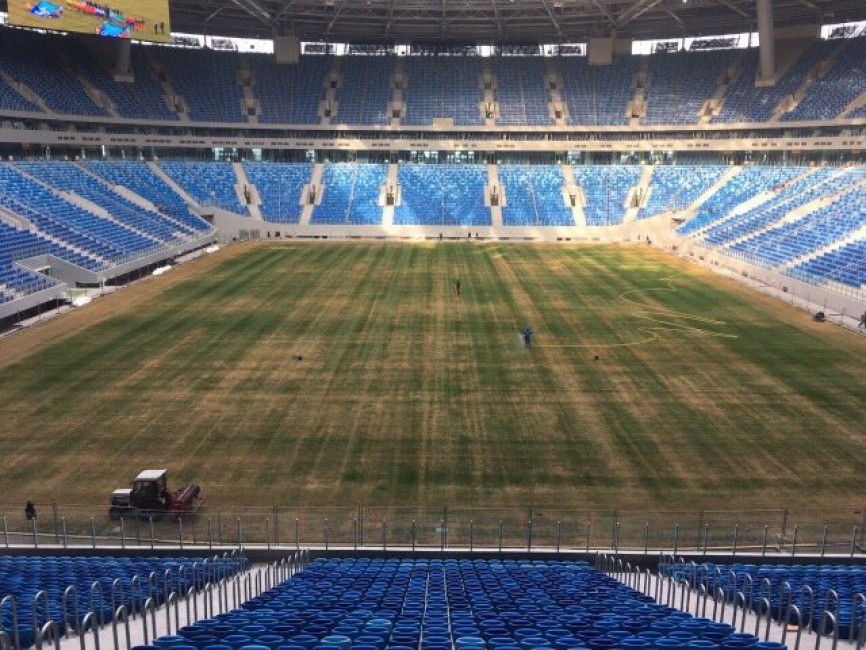 In September 2018, a master plan was developed by my company, Hayden Turfcare, on how to solve this issue. This involved removing the pitch in the middle of winter during the Christmas period of 2017/18 to be ready in time for the UEFA European competitions.

The product used was a Mixto hybrid carpet from Italy, similar to that used in The Bernabau in Madrid. The project had a very tight window to be completed, so we decided to grow a new pitch in a disused greenhouse in Odense, Denmark. Growth in the glass house allowed us to establish turf in a similar environment to the stadium, but also allowed us to heat the climate through the winter and guarantee harvesting dates. This was the first time in the world that turf was grown for commercial harvest in a glasshouse and it wasn't without its challenges.

Growing Turf In An Odense Greenhouse

The old pitch was removed under our direction in December 2017. The pitch was removed and replaced over a two week period, stretching right through Christmas, including Christmas day. The roof was closed so a comfortable 15OC environment sheltered us from the raging snow and cold of minus 20OC outside. A new rootzone was fully tested and approved by ourselves, before contractors Queensgrass International graded the newly installed material. With the new rootzone down, a date for 13th January was chosen for the installation. 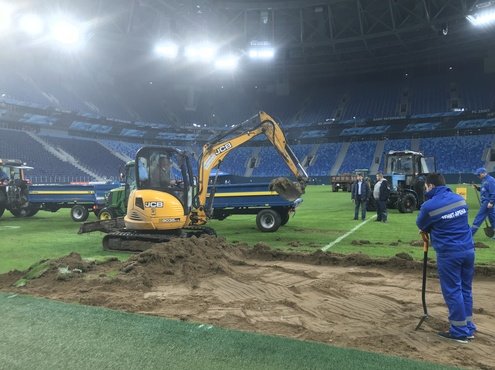 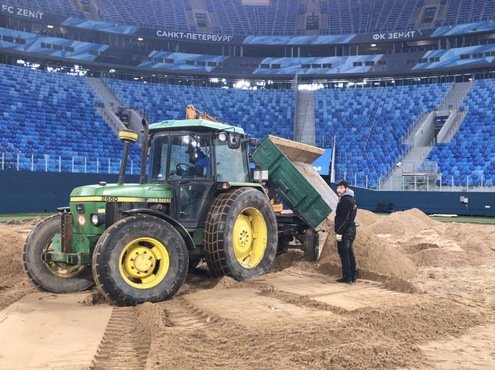 The turf was harvested and transported for seventy-two hours across a journey of 3,000km. The challenges of keeping turf alive in fridge wagons over logistically difficult jobs such as this cannot be underestimated. Combining this with phytosanitary and customs clearance time and procedures was testing. Thankfully, the project was supported by the Russian Government who were a huge help in this aspect.

The turf was installed over a five day period by Queensgrass. Installing hybrid turf is a challenge in itself, with the initial result being far from what would usually be expected from soil based turf. The turf must be cut using angle grinders and concrete saws due to the carpet backing and fibres. However, the contractor persevered and, together with groundsman Kosta Kreminsky, took the pitch to an acceptable European level for the Zenit vs Celtic game on 15th February 2018. 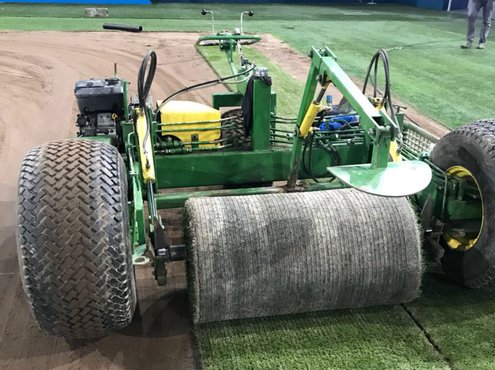 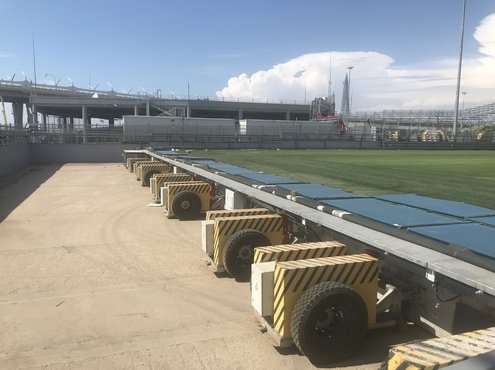 Left: Turf Installation. Right: Electric Motors Move The Pitch In And Out Of The Stadium

The main technology used to grow the grass is a full pitch coverage of SGL and TLS lights, as well as a series of turbo fans around the pitch edge for air circulation. The pitch rolling mechanism is only used in summer due to the Russian winter, so the grass must be grown in a completely artificial environment from October through to April each year.

A full and extensive suite of machines are available to us for the maintenance of the pitch, as are the eight groundstaff led by Kosta. He trained through Mike O'Keeffe's Ohio State University Programme and has become one of the finest in the business. 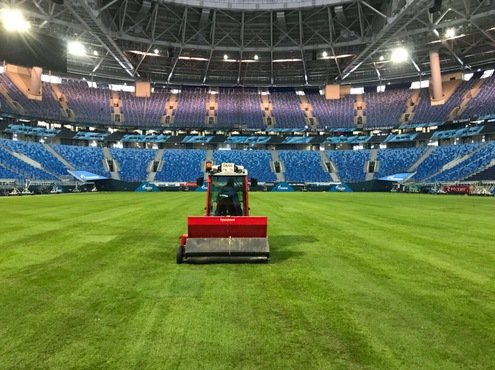 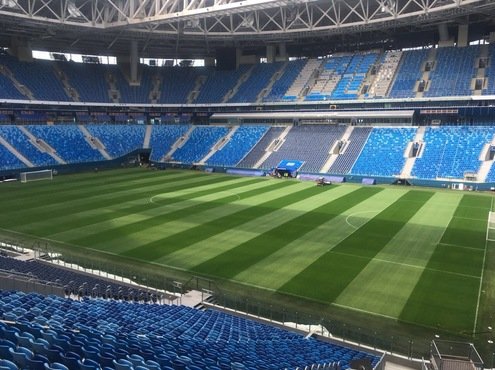 Left: A full suite of machinery is available. Right: pitch prepared and ready for the world's elite

Due to the overlay for the World Cup, including cabling, advertising etc., the pitch was rolled out, for a limited period, in May 2018 ahead of the tournament. The result of natural sunlight on the pitch was amazing, but shortlived, with the requirement to roll it back in again one week before kick off.

The pitch has performed excellently and is a new milestone in our quest for better pitches in tournaments.

In the world's most extreme grass growing environment, one of the best pitches of the FIFA World Cup 2018 Russia was the Saint Petersburg stadium. This has been down to teamwork and dedication. I also like to think that truly independent consulting based on science and engineering fact remains very relevant in these circumstances. 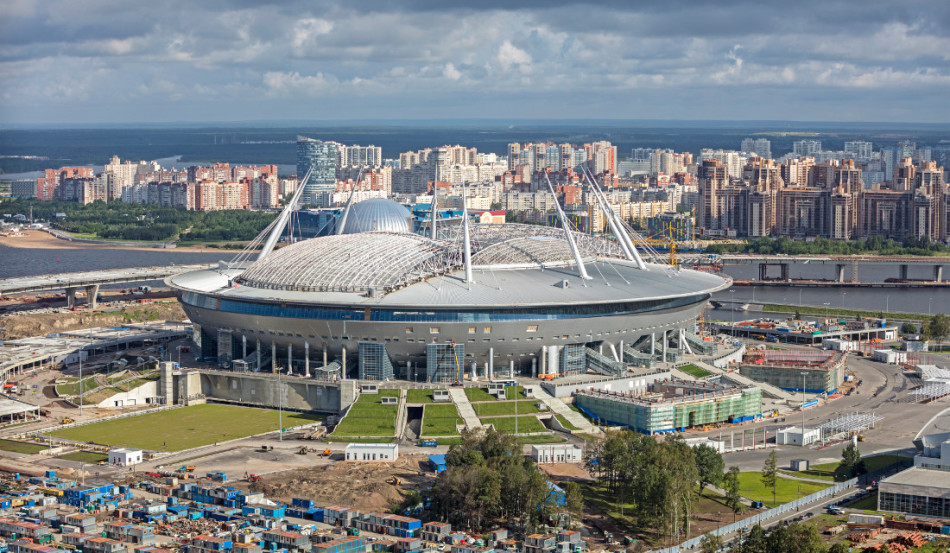 The stadium has been designed by Japanese architecture firm Kisho Kurokawa and resembles the form of a spaceship with the roof held up by four masts. It has some similarities with that of the Japanese Toyota Stadium, which was designed by the same firm.

The first official match held at the stadium was the Russian Premier League game between FC Zenit Saint Petersburg and FC Ural on 22 April 2017. Branislav Ivanović scored the first goal in the stadium's history.

On 17 June 2017, the first game of 2017 FIFA Confederations Cup was held at the stadium with the Group A match between the host Russia and New Zealand.

On 2 July 2017, the 2017 FIFA Confederations Cup final match was held at the stadium between Chile and Germany, becoming the most attended match of the tournament and also setting the record attendance for the stadium.

Saint Petersburg Stadium was one of the playing venues of the 2018 World Cup, during which it hosted four first round group matches, a quarter final, a semi final and the third place play-off match.