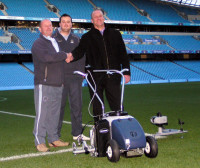 The multi-award winning BeamRider laser line marker has recently been purchased by Manchester City FC. Making them the first professional club in the world to do so.

The official hand over took place during December's 'IOG in Action' event held at the club's stadium after the delegates had seen and heard how the BeamRider aids and improves the line marking operation.

Roy Rigby MCFC's head groundsman said "We are always looking at state-of-the-art technologies that can help us produce perfect conditions for all our playing surfaces. After keeping a close eye on how the laser system has been developing for some time now and carrying out our own trials at the club, it made sense to purchase a unit. All the grounds team are looking forward to using it."

BeamRiders' business development manager Phil Sharples said "After well over a year and a half of stringent trials, tests and demonstrations with our post production models we are delighted that Manchester City FC has purchased the new and refined final working version from Fleet Line Markers Ltd, our official UK distributor.

Knowing the team at Manchester City and also knowing how seriously they take the presentation and accuracy of their line work at both the training ground and stadium, the BeamRider system met their needs instantly… It's the best match we've ever seen!"