0 A20 leads to accolade for Burton Albion 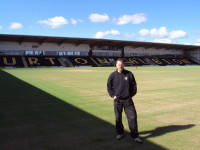 When Simon Marshall took the reins as Head Groundsman of 'The Brewers' in 2008 the pitch wasn't in a particularly bad state he just thought it wasn't looking and performing to its true potential. Simon decided that the maintenance schedule wasn't the true culprit so he started looking around for a new seed mixture that could deliver results.

Unconventionally for some, Simon had come to Burton Albion from Derbyshire County Cricket Club. He had known of British Seed Houses from his time there, so when Paul Moreton of BSH visited The Pirelli Stadium, they looked at the available options and settled on the BSH A20 Premier Ryesport mixture.

He first applied A20 in the run up to the 2009/2010 season, "I began the renovation programme in May with fraise mowing of the entire pitch to remove the top layer, and with it any Poa. This was then followed by aeration and then top dressing with 70 tonnes of sand and Rootzone" Simon explained. "I then applied 19 bags of seed using a mixture of dimple and drill methods to get a more random dispersal and fuller coverage".

After applying a granular fertiliser, Simon reported that the A20 ryegrass mixture - which combines the Gallus, Vesuvius, Lucius and Carnac cultivars - established into a thick sward and developed a rich, dark green colour. "The seed germinated within nine days which I was really impressed with, especially as we had appalling weather that year and rain washed some of the seed into banks at the side of the pitch. Just three weeks after sowing I was able to make a first cut with a rotary mower to take the tips off, and then follow on with a finer cut with cylinder mowers to get a beautiful finish," he went on to say. 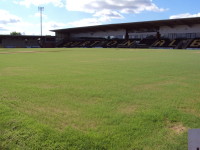 Year two of his pitch renovation programme, pre season 2010/2011, saw germination occurring in just six days with good rooting and the grass establishing over all the pitch with no bare patches. Just as well because the pitch took a real hammering this year with 55 games being played at the ground. Without a disciplined and effective pitch renovation programme in place the quality and performance of the turf would have been in question.

"Clubs in League 2 don't have the same type of budgets as the higher league clubs. This means we don't have the extra staff and resources that they might have at their disposal. As a result, the BSH A20 mixture has performed excellently, allowing a relatively basic maintenance schedule. I mow at least every other day, before each game during the growing season and divot the pitch after it has been played on, that's it!

Even this years particularly harsh winter did not affect the appearance and performance of Simon's pitch, Paul Moreton explains, "the grass survived without the need of lights, grow sheets or winter germination seed. With one application done properly, A20 will last all season long.

The maintenance schedule may be basic to Simon but the players think more highly, "I have had lots of good reports from the team when they return from an away game. It seems not all the surfaces they play are up to our standard", concluded a happy Simon who was awarded the Coca Cola Football League 2 Groundsman of the Year award for the 09/10 season.