Derek Patch, Director of the Arboricultural Advisory and Information Service (AAIS) is to conduct a comparison study to determine the effects of one-metre deep, compressed air de-compaction treatment on mature trees.

Following a visit by Terrain Aeration to Aberdare Park, South Wales in May 2005, to de-compact the root zones of Beech and Oak trees, Gwyn James, Arboricultural Officer for Rhondda Cynon Taff Council will send plug samples from the trunks of both treated and some untreated trees for inspection under the microscope of the AAIS.

The distance between the rings will be measured to determine the effect of this specialist aeration on the growth spurts of the trees in the last three years.

Terrain Aeration's MD David Green welcomes the move. "At last we're getting some objective testing done," he says. "Up until now we've had to rely on before and after photographs. The original Terralift system, (which now only exists with us at Terrain Aeration) was designed to treat trees and has been used for this purpose for years. The results of some trials carried out in the 1980's were published in Germany and it is time we updated this work. I am sure we are going to get documentary proof that this treatment boosts growth."

Gwyn James, who called the company back this year to treat yet more trees and some areas of very wet turf in the park says that as far as he's concerned the proof of the pudding is in the eating. "I'm comparing the increase in leaf cover of those treated two years ago and those which were not," he says. "This is an area of very mature Beech and Oak and the treated trees look as if they've had the clock turned back 50 years." 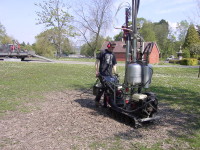 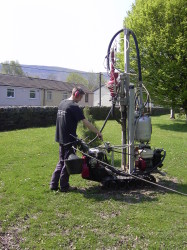