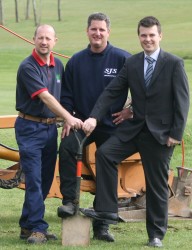 Work has begun at Abbey Hill Golf Centre on a new irrigation system to reduce water consumption while still maintaining the course's pristine fairways and greens.

The public pay-and-play facility is part of Burhill Golf & Leisure, the UK's leading golf course owner and operator, which has committed £300,000 to spend on course improvements over the next three years.

The new irrigation system is the first part of the plan and will see 4,400-metres of new piping laid, which will pump water around the 18-hole Main Course as well as the Par-3 Short Course and will reduce the amount of water Abbey Hill uses to maintain its courses by 10 per cent.

The new system is in keeping with Abbey Hill's own environmental plan, which has already seen the centre place 22-bird boxes around the course and created a conservation area for wildlife to inhabit by the 18th hole.

Despite the ongoing works there is no disruption whatsoever, with both golf courses fully open.

Ross Edmonds, Abbey Hill Course Manager, explained: "The way the pipes and electric cables are laid is fascinating. There has been no need to dig up any part of the course as everything is laid using the latest methods.

"I can control every sprinkler head remotely, so if an area of the course doesn't need watering, it won't get watered, saving on wasted water. With the old system the sprinklers were on blocks of two to four, but now they are controlled individually, so if the back of a green is dry, but the front is wet, I can just turn the back sprinkler on."

The new irrigation system is being installed by local Milton Keynes-based company SJS Irrigation, and will be laid in three stages over the next three winters.