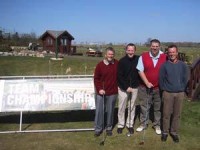 The team (shown right)- consisting of club captain Jerry Collis, club manager Jonathan Gale, Greenkeeper Steven Cherry and club professional Craig Stephenson - beat off the challenge of 16 other teams in the competition, which was organised by Peter Helps, sales manager at John Deere dealer Turner Groundscare of Bledlow, Aylesbury in Buckinghamshire. He was assisted on the day by John Deere territory manager Nick Ashman and BIGGA representative Derek Farrington.

The winners finished on a score of 60, just one shot clear of the field. The competition is based on a modified scramble, with the professional playing his own ball throughout the 18 holes, and the other three players forming the scramble. The team then takes the lowest score at each hole of either the professional or the net scramble team.

Abbey Hill Golf Centre in Milton Keynes is an 18-hole pay and play course, and is one of the nine courses around the country that make up the Burhill Golf & Leisure Group. The team, joined by a representative of Turner Groundscare, now goes through to the Great Britain national final at The Belfry on July 25, to play for a place in the world final at Grayhawk Golf Club in Scottsdale, Arizona, USA in November.

"We took part in the tournament last year but didn't make it to the next round," says head Greenkeeper at the club, Steven Cherry. "So we are all very pleased, if not a little surprised, to now be going to The Belfry, and who knows, maybe Scottsdale, Arizona. I have played at The Belfry before, but we'll still be putting as much practice in as possible between now and the next round."

The John Deere Team Championship is now in its 17th year, and last year teams from Great Britain and Ireland were invited to participate for the first time. A total of 27 dealers took part in the qualifying tournaments, with 450 teams and 1800 players participating. The national winners, Brokenhurst Golf Club from the New Forest and Milltown Golf Club from Dublin, travelled to North America to compete against teams from the USA, Canada, Germany, Australia and Sweden.

The format of the Great Britain and Ireland Team Championship is slightly different this year, with two separate national finals at The Belfry and The K Club in Co Kildare (hosts of the Ryder Cup in 2006). The winning team from each venue will once again go on to the world finals at Grayhawk Golf Club, with the chance to be crowned John Deere World Team Champions 2003.

John Deere Limited is continuing its support of greenkeeping associations by making a donation of £25 for every British and Irish team entered, to assist the educational activities of BIGGA (British & International Golf Greenkeepers Association) and GCSAI (Golf Course Superintendents Association of Ireland).