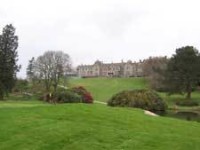 "The green around the 3rd hole was beside a 100 year old Sequoia Wellingtonia tree, whose roots were growing right across the green's surface," he continues. "It was a case of either we chop the tree or move the green, and we chose the latter. It gave us the opportunity to move it back alongside the lake with a wonderful view up to the castle."

The new third, a par 3, is one of head greenkeeper Mike Symons' favourite features, and having been at Bovey Castle for 14 years he can appreciate the improvements. "The old third hole used to play to 158 yds but now it plays to 205yds," he observes "and the green is almost surrounded by water. The lake borders it on the left and in front in a crescent shape, and on the right runs the river Bovey."

The 18th hole was one of two, which were built on a slope, and according to Mike was almost un-playable.

"There was a huge slope left to right, from fairway to green," he remembers, "and the only people who could pay it properly were top players. No-one else could hit the ball far enough to get it onto the green in regulation"

Tom Mackenzie has also been able to re-instate an original Abercromby hole, the 9th, which had been lost over time. "By adding a hole to the front nine we ran two together, the old 9th and 10th, to make a par 5," he explains.

"Underneath the course is a gritty clay, which for the most part does not drain that badly," he explains, "but inevitably within the confines of the river valley there were special problems that had to be dealt with to maximise playability. With this in mind, lytag band has been put into the retained (soil based) greens. For the new greens, the sand based specification for the root zone mix was modified and we did away with the usual stone carpet. The idea was to build new greens that will behave in a similar manner to the old ones, which, in the near future, will help Mike Symons carry out a consistent maintenance programme throughout."

All the fairways (the 2nd to the 9th) on lower ground, have received comprehensive piped drainage installed by White Horse Contractors, mostly at 10 metre centres.

David Stansfield chose washed turf over turf grown on a specified root zone for the new greens because he wanted to match the greens being retained. "There wasn't time for suitable turf to be grown on the root zone mix we needed," he says, "and as I've been quite happy with the results achieved with washed turf over the last two or three years it was the obvious choice here."

Having used Lindum's washed greens turf in the past and knowing it to be of consistent quality, Stansfield recommended it again, along with about 10 hectares of conventional turf for the fairways and surrounds.

"My main concern was that the new turf should be of the right colour and texture, and have a balance of grass species to fit in with the existing course," he recalls.

Stephen Fell, Lindum's MD says that the company were delighted to be turfing another course for Peter de Savary (Lindum previously supplied Skibo Castle) and it was particularly rewarding to see the washed turf establishing so rapidly. "Bovey Castle presented an unusual challenge as we never knew how much turf was ultimately going to be needed," he recalls.

In the event, the project demanded more turf than anyone had at first imagined. Gaining planning permission, (the plans for the golf course were submitted with those for the hotel), within a National Park is never easy, and work which should have begun in June (03) was held back four months until October. De Savary, eager to see some return for his investment kept to his original July (04) deadline and any areas that were to be seeded originally, were, instead turfed. The construction and grow-in has been a race against time.

John Pierson of John Pierson Contractors, who, as site manager was still on Dartmoor last October (04) supervising the final stages of the grow-in period, had his machines in place, ready to begin as soon as permission came through.

"In a bid to get the course playable on time, we had 6 to 8 companies involved and up to 30 people on site at any one time," he recalls. "Over 100,000 sq metres of turf went down and the majority of it came in during the winter. Because of the weather the ground was so wet that we couldn't use laying equipment, and had to order the turf in conventional size rolls. It was very labour intensive."

"Don't re-build a golf course on the top of Dartmoor in winter!" laughs Tom Mackenzie, "although I'd probably do it all again given half the chance. It wasn't the cold, but the continual rain that made ground conditions difficult, and the site in a steep river valley didn't help. We often found the roads closed and had to make 40 mile detours."

Mike Symons, who had taken the winter in his stride, now had his worst moments.

"We had five dry weeks and could not put enough water onto the newly turfed areas to keep them going," he remembers. "No body expected such a prolonged dry spell this early in the year and North Staffs Irrigation were not due to complete our new irrigation system until the end of May. We lost quite a lot of turf."

Despite the setbacks, the course opened to hotel guests in July and to members in August. By the beginning of October, Mike Symons was almost satisfied. "The greens are superb and the tees are all good," he declared. "The 5th and 10th fairways are the only ones that are a little bit slow. They were the last to be done and the grass is a bit new to cut to normal fairway heights. They're at 20mms now instead of 14 or 15mms but by next spring they'll be fine."

With this degree of perfectionism inherent in his head greenkeeper, De Savary should be confident that his re-modelled golf course is not only in sympathy with its 1920s heritage, but will be maintained to the highest standards.