The continuing success of the sports academy at a Gloucestershire college has prompted the re-construction of four winter sports pitches.

Hartpury College, Associate Faculty of the University of the West of England now has over 3,000 full time Further and Higher Education students, 40% of whom are studying Sports Science related courses.

"The Hartpury Academy of Sport often attracts very talented athletes," says Grounds and Sports Turf manager Stewart Ward, "and our concept enables them to continue with their education whilst further developing their abilities within their chosen sport.

We have enjoyed phenomenal sporting success in recent years and the achievements of the Rugby and Football Academies have been remarkable. Our teams have won, (among other trophies) the British Universities and College's Championships, the EDF Intermediate Cup, the FA National Champions Cup and the Gulliver's Super 16 Tournament."

"Success doesn't come about without intense training and weekly fixtures and the pitches, inevitably take quite a pounding," Stewart continues. "They're used not only by Academy players and students but also Gloucester Rugby who use Hartpury as their training venue."

With the winter sports pitches in such demand, and high sporting standards among the students to maintain, the decision was made to upgrade the existing facilities. J Pugh-Lewis Ltd won the main contract to construct four new pitches on an area of existing pitches that was under-utilised owing to poor surface levels and inadequate drainage. The company started work in Feb/March. 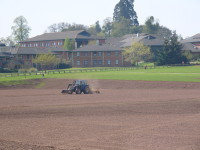 "They've constructed two football and two rugby pitches." Stewart continues. "We had a sub-contractor remove the top soil and level the subsoil before replacing the top soil and shaping and grading it to J Pugh-Lewis specifications.

Pugh-Lewis then did the final laser-grading themselves and installed the primary drainage system with 80mm lateral pipes at 5 metre spacings. All the drains were backfilled with pea gravel to 150mm below the surface and topped up with coarse sand.

The surface was then cultivated and re-graded and an inch of sand was spread before sand slits were installed every two metres, which dissect into the main drains. J Pugh-Lewis cultivated again before applying fertiliser and seeding. It was a massive undertaking."

Director James Pugh-Lewis says the contract was completed to the company's standard design specifications for schools and universities and the only complications were caused by poor weather last year.

Now that the renovations are near completion, Hartpury College will boast five rugby and three football pitches for the new academic year as well as a rubber crumb pitch. "The student intake has grown as a result of the high success of the Sports Academy," says Stewart. "Now that we will have a full compliment of well drained winter sports pitches, that success should continue to grow next season."