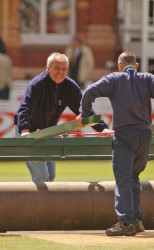 MCC's Head Groundsman, Mick Hunt, and his team have been praised for the quality of the pitches they produced for both first-class and one-day cricket at Lord's during the 2006 season.

In the England & Wales Cricket Board's "Groundsman of the Year" awards, announced today, Lord's was the runner-up in the category for first-class matches; it also earned commended status for its one-day pitches.

"At Lord's, the 2006 season was a particularly long and busy one. The ground staged an enormous amount of cricket and an extremely wide range of matches - from the one-day village final to two five-day Tests.

It took a great deal of skill, and a tremendous amount of sheer hard work, to ensure that Lord's could host such a huge quantity of cricket on such high quality pitches - from our first match of the season, in mid-April, to the final fixture, five months later.

I am delighted that Mick Hunt and his team have earned this acclaim from the ECB. It's been hard-earned - and it's very 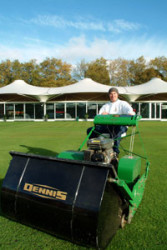 Although its square is not particularly large, Lord's hosted 31 fixtures - which included thirteen international matchdays - during the 2006 cricket season.