0 Add a touch of garlic to your greens! 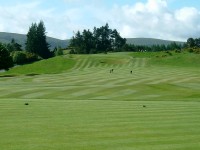 Habberley Golf Club in Worcestershire was established in 1930 and for the past 14 years, Warren Forster has been Head Greenkeeper. As part of his on-going programme of course management, Warren was introduced last autumn to the benefits of the new Aston Turf Garlic Spray product.

As Greenkeepers seek to alleviate nematode problems and other insect pests to create a fungal-free turf, Aston Turf has been developed to provide such a solution. Fungal free-turf is made possible using a prophylactic formula.

This is a water-based natural product formulated from garlic extracts and citrus. It is both concentrated, biodegradable and contains high levels of allicin which has anti-bacterial and anti-fungal properties.

When applied during the autumn and winter periods, Aston Turf provides many benefits. The course is an attractive location for badgers and the application has seen their presence greatly reduced on the greens! Greens management has been made easier with the reduction of fusarium, together with a drop in wormcasts and moss growth. Warren commented that no snow mould had been evident following the cold and often snow-bound winter.

By treating his greens every 2-3 weeks with Aston Turf he intends to maintain this improved level and quality of sward for his members and golfers in general!

Kim Blake is Course Manager at Fulford Heath GC - an impressive 18 hole course, on natural parkland with a clay base built in 1933. With 630 members this well respected course has the highest standards to maintain. Kim was also contacted last summer by Nick Bennett and agreed to trial the product on a five metre wide area of the putting green with a 2 metre control strip. In between, the remainder of the green was treated with a fungicide.

On the area treated with Aston Turf Garlic Spray, Fusarium was less evident than on the control strip and there was no visual difference between the trial strip and the remainder of the green sprayed with a fungicide. Trial tees were also treated and saw a reduction of 70-80% in worm casts.

The 17th fairway provided similar results. Kim intends to use Aston Turf Garlic Spray within his course maintenance programme for 2010. This should ensure both a healthier and more natural turf.