0 Adding quality to golf at Addington

Adding quality to golf at Addington 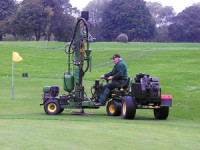 One of Surrey's top golf courses has found the solution to waterlogged and unplayable greens when conventional underground drainage failed to cure the problem.

The Addington Golf Club, near Croydon - described as a 'gem among courses' set amongst the heath and woodland of North Surrey - has suffered lately along with many other courses from poor drainage.

They decided to seek the help of Suffolk based soil aeration company, C&P Soilcare who specialises in tackling drainage problems on sports amenities.

Addington's head greenkeeper, John Honeysett, says the soil structure of the North Downs is a mixture of chalk and gravel: "A deep crust had formed beneath some of the greens due to long-term compaction through repeated use. One particular green became 'ponded' and unplayable after every rainfall."

John Warren, general manager of C&P Soilcare, advised deploying its Terralift system to break up the compaction that was preventing the surfaces from draining.

"We used our Terralift 2000" says Mr Warren, "a unique machine that hydraulically hammers a probe down to a depth of one metre and with a blast of high pressure compressed air fractures the compacted sub-strata. Dried seaweed kelp is simultaneously pumped into the network of vertical and lateral fissures it has created which re-hydrates and expand when wet, ensuring that the aeration effect is sustained."

Five of the Addington's 18 greens were treated in this way and John Honeysett is well pleased with the results, commenting: "All the treated greens now remain dry and the one which flooded previously gives us no problem at all."

Soilcare, which is based at Nedging, near Ipswich, was set up in 1991 by the Chaplin family to tackle problems in drainage and plant growth caused by compaction and poor soil structure. Its Terralift and deep drill services, including use of a seaweed mix injected into soil fissures, help prevent waterlogging and encourage healthy root growth of turf, trees and shrubs.