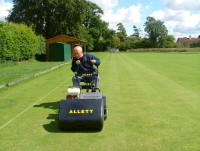 Members of Letchworth Croquet Club say that their lawns have never looked or played so well since a new Allett Tournament 24 took over the mowing prior to the 2011 season.

Installed by Allett at the Hertfordshire club late last year, the precision fine-turf mower was used by the club's grounds team to prepare two croquet lawns in the run-up to the start of the new season in early May and has been used ever since twice a week, helping maintain a consistent grass height of around 5mm.

According to ground maintenance manager, Duncan Hector, the improvement seen across the surface of the lawns has been remarkable and Letchworth Croquet Club now boasts two of the finest courts in the region.

"We've seen a dramatic rise in turf standards thanks to the excellent cut produced by the Tournament, assisted by its turf groomer attachment which lifts lateral grasses and dead material just ahead of the cutting cylinder," he said. "The result is a level and consistent finish which is ideal for a game such as croquet where a fast, true run of the ball is important."

Having tested the surface speed at a 5mm cutting height, the grounds team found that use of the groomer produced an increase in ball speed of between 10 and 20 per cent. As a result, the grass does not have to cut any lower to produce a suitably fast lawn, an important factor in maintaining healthy grass plants. 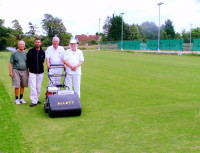 "The biggest advantage to us is that we are able to play croquet to a higher level," points out Mr Hector. "This is both important and significant and is why everyone who visits Letchworth praises our courts which have played well all season without any irrigation. Letchworth now has an enviable reputation across the country for the consistently high standard of its courts and much of this can be credited to the new Allett mower."

Established in 1987, Letchworth Croquet Club is today a thriving section of the Letchworth Sports and Tennis Club, playing league, cup and friendly matches on croquet lawns covering a total area of around 2,000 sq metres.

The club has 90 members and participates in both regional and national competitions as well as hosting official Croquet Association tournaments. There is also a well-supported programme of club tournaments, challenges and friendly matches.

With croquet being played on Letchworth's lawns every day of the week from spring until autumn, and even into the winter when weather and ground conditions allow, the grass is under the microscope for much of the year. "We strive to maintain and present the best possible playing surfaces at all times," concluded Duncan Hector. "The arrival of the Allett Tournament mower has made that job considerably easier, adding a professional touch to the club and our game."

Allett Tournament 24 fine-turf mower in action on Letchworth Croquet Club's lawns. The machine was adapted by Allett to accommodate a trailing seat, minimising the amount of walking on a grass area measuring around 2,000 sq metres.