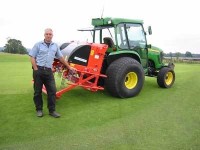 This was a significant purchasing decision for owner/director David Moss and as you would expect he took a professional and pragmatic approach to selecting the right machine as it will be used extensively on the two 9-hole courses under his management.

"We previously used a contractor or hired in a machine, but have now decided that it's economically viable to purchase a machine of our own", he said.

A shortlist was compiled and whittled down to Wiedenmann and a competitor with both companies demonstrating their machines. They also left a tractor/ aerator combination for a week of trials in order that each member of the greenkeeping team could evaluate each package. The aerators were also mounted onto both tractors to further assess their performance.

"Following the week of trials, I asked my team to select their preferred machine on the hypothesis that both machines were the same price and it was their money that would be spent! It was a unanimous decision to go with the John Deere tractor and Wiedenmann Terra Spike combination", he added.

The determining factors in the decision centred on build quality and ease of operation. The Terra Spike's rear roller was considered more rugged and better engineered and the tine retention system, using tapered tines and threaded bushes instead of grub screws, was superior and held the tines in place more effectively. Finally, the hydraulic depth control, which enables the operator to adjust ground penetration on the move and the handle-operated heave control scored highly over the competition making it more user-friendly.

"When I visited Wiedenmann's head office in Glasgow for a demonstration I came away very impressed with the overall professionalism and friendliness of the organisation. It's a very well run company with a great customer care ethic that has continued right through the delivery, installation and after sales phases of our purchase", David Moss concluded.