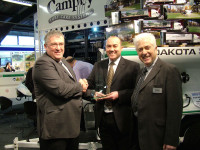 Adrian Gardner's sales expertise has earned him special recognition from Campey Turf Care Systems, having won the company's Top Dealer Rep Award for 2007. Adrian, who is Sales Professional with The Double A Trading Company Ltd of Fife, was presented with his trophy during the BTME Exhibition at Harrogate in January.

Competition amongst Campey dealers was intense, and so Adrian's success is a significant achievement, especially as he has only been with Double A for 18 months. During that time he has sold over 25 versatile Dakota Turf Tender machines to golf courses throughout Scotland, amongst other sales successes.

Originally from Yorkshire, Adrian relocated to Scotland while working in the textile industry, and has quickly made the transition to grounds care machinery sales.
This is the first time that Campey have presented the Top Dealer Rep Award, which will become an annual event to recognise sales excellence.

Adrian says he will not give up his award easily. He has already chalked up several major sales of Campey equipment in 2008 amongst colleges, contractors and golf clubs.