0 Advanced Transmission suits The Accies down to the ground 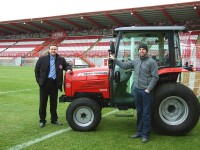 Bought primarily to operate slitting and solid tining equipment within the main stadium at New Douglas Park and at the club's training ground, the 32hp MF 1533 tractor is able to change up or down gear at the touch of a button, enabling turf aeration patterns to be altered instantly and on the move to suit surface and root zone conditions.

"The newly-laid sand-based pitch in the main stadium drains really well, requiring aeration at standard 100mm centres," explained Colin. "However, the training pitches are all soil-based, demanding a much closer aeration pattern at 50mm centres over winter. DynaQPS transmission enables hole patterns to be changed very easily by increasing or reducing tractor working speed without using the clutch or interrupting drive to the power take-off. The gearbox also has an excellent range of gears, including creep speeds for ultra-slow work."

Having secured promotion to the Scottish Premier League (SPL) at the end of the 2007 - 2008 season, "The Accies" - as the club is known by fans - needed to replace its existing synthetic playing surface with a new all-turf pitch to comply with SPL rules.

Colin Fraser was invited to join the club in May 2008 having been groundsman at Livingston FC for the previous 11 years. "The club wanted someone with good experience of looking after natural turf and I fitted the bill," he explained. "Ground works for the new pitch began in early June and the first rolls of turf were laid three weeks later. Our first game on the new surface was played on 11 August 2008."

Accompanying the move to grass was the need to identify and acquire suitable turf maintenance machinery to help look after the pitch and training ground. "The choice of tractor was helped by the fact that I had built an excellent relationship with local Massey Ferguson Groundscare dealer, SGM (UK) Ltd, when I had been groundsman at Livingston FC," said Colin. "I discussed my tractor requirements with SGM's Steven McInroy and he recommended the MF 1533 with DynaQPS transmission. Having used the new tractor extensively both on slow-speed aeration and high-speed trailer work, I think we made a very good decision. The transmission is a delight, making the tractor very simple to operate."