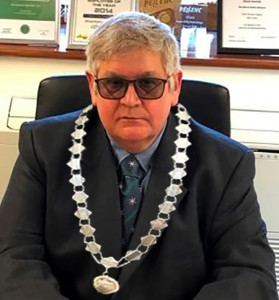 Mr Malin is Managing Director of Etesia UK and has been an active member of the AEA for over 14 years. As President of the AEA Les' role will be to lead the Board of Directors, while the farm equipment and outdoor power equipment councils and various technical and specialist groups focus on current issues and initiatives.

He speaks of the unusual circumstances of his appointment and the way forward for the Agriculture and Outdoor Power sectors.

Due to Covid-19 the 2020, the AEA Annual General Meeting was postponed, leading the Association to take the unprecedented step to nominate Mr Les Malin as its President-Elect. Now, however, and following recently introduced changes in legislation, Mr Malin's role as President of the AEA has been formalised, as the AGM was allowed to be held virtually, with some 30 participants in attendance, as well as the company legal advisors to ensure all was legally binding.

Mr Malin commented on the alternative course of action, "First of all, I would like to thank the AEA Board of Directors for nominating me to be the next President of the AEA. It is, indeed, against a backdrop of very uncertain and difficult times. With COVID 19 now having taken over from Brexit as the focus of everyone in the UK, the work of the AEA has had to adapt like many other businesses and groups."

Ruth Bailey, CEO and Director General of the AEA said, "It is indeed very strange times. We are delighted, however, to have Les as our President and welcome his knowledge and experience within the industry to guide us through."

Les' early background is rooted in agriculture, where in his early years he worked on a mixed farm and would also use the farm equipment for contracting jobs. He then started his own contracting business in his 20's. In the mid 1990's he made his move to outdoor power equipment as area manager for Polaris, after which he worked at Amazone Groundcare before finally moving to Estesia as an ASM, then General Manager and finally Managing Director.

Les has many years of experience both within agriculture and the outdoor power equipment sector and said of the future "This virus has shown us more than ever that Technology has to be the key forward for all of us, we have to embrace the future forget the past and show our customers that we can offer expertise, money saving machinery, environmentally efficient solutions such as robotics in agricultural or the outdoor sectors. We as an industry must embrace these modern methods to safeguard our futures and entice the younger generation into a sector of employment that few people leave if they actively engage in its culture and history"

Mr Malin is due to receive his official chain of office in more certain and safe times but so he knows what to look forward to, we have mocked up his official image.