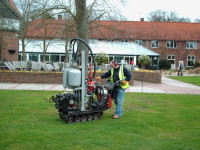 The Tulip Tree, planted by the Queen Mother in 1954 is one of three famous landmarks at RHS Wisley, treated this spring to one-metre deep, compressed air de-compaction.

RHS Garden Wisley is the flagship garden of the Royal Horticultural Society. It is open 364 days a year (only closed on Christmas day) and receives around 850,000 visitors annually.

A large percentage of these visitors find their way to the restaurant, opposite the large grassed area known as Seven Acres, where the Liriodendron tulipifera (Tulip Tree) resides in specimen splendour bearing its name tag and royal connections. The tree is close to the restaurant and receives a steady stream of visitors keen to read the plaque. Over fifty years of traffic has had an effect. Staff have noticed canopy crown die-back which is a sign of stress that could well have been caused by compaction.

Suffolk based Terrain Aeration, the compressed air de-compaction specialists, worked with their Airforce Scamper Terralift machine in two circles, one metre outside the canopy and one metre within it. Inserting the probe one metre into the subsoil, the company injected compressed air to create underground fractures and fissures rising all the way to the surface. Dried milled seaweed together with mycorrhizal fungi was inserted on the final air blast to add nutrients and, as it swells when wet, keep the new air channels open.

Tony Gregory, who is in charge of turf, mature trees, machinery and irrigation at Wisley, then directed the company to the external landscaped area, designed by Tom Stuart-Smith, surrounding the new Bicentenary Glasshouse opened by H.M. the Queen last summer. Post construction compaction needed to be relieved, as the area was landscaped immediately after the glasshouse was built. Having repeated the aeration process, working at two metre spacings on a staggered grid pattern, Terrain Aeration swapped Airforce Scamper, their lightweight, four wheeled ride-on machine for Tracker, a pedestrian terralift, less than a metre wide and built on caterpillar tracks.

The company's last port of call was the turf on either side of the formal canal, designed by Lanning Roper and Sir Geoffrey Jellicoe in the early 1970s. The canal, covered by water lilies in summer, fronting the 'Surrey style' mansion, which serves the RHS as a laboratory, is one of the most notable features of Wisley. The turf suffers from very wet conditions and due to the narrowness of the turf panels, needs a comparatively narrow terralift machine to perform the aeration process.

Now that the compaction has been relieved it will take time before the benefits become apparent. But future visitors to this iconic garden can rest assured that everything is being done to maintain their favourite landmarks, both old and new.

For further information on the one-metre deep compressed air de-compaction treatment supplied by Terrain Aeration, contact the company on Tel: 01449 673783 or visit their website at: www.terrainaeration.co.uk