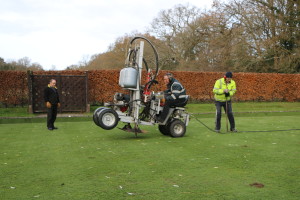 This fact and the accumulation over the years of top dressings and the use of machinery had all contributed to compaction leading to severe waterlogging. The answer turned out to be Terrain Aeration deep aeration.

Heavy rain on the green had for many years resulted in as much as half the area becoming submerged under standing water as deep as four inches, and there it would remain. The all too frequent cancellation of matches caused severe loss of summer revenue and it was clear a solution had to be found. It was not as if normal procedure had not been followed, with hollow tining regularly carried out and solid tining done six times a year.

"While we were investigating we found a drainage pipe," says one of the club's greenkeepers Graham Baker, "but this was not blocked and there seemed to be no logical sense to the problem. Talking to older club members I found the flooding had been going on for thirty years or so." Core samples were taken in the search for answers and showed layers of both orange and blue clay but principally it was the compaction that took the blame.

Graham looked on the internet for a solution and found Terrain Aeration deep aeration who the club asked to resolve the problem.

The Terrain Aeration Terralift machine, able to negotiate the narrow access to the green, was put to work with the metre depth probe, injecting compressed air to break up the compaction and relieve the panning. Terrain Aeration completed the work by early afternoon on a day that became quite a social event, with club members filling the probe holes and seeing first-hand how the treatment was carried out. "They've been talking about it ever since and spreading the word on how effective Terrain Aeration's work has been," Graham adds "Great service, great product and even with the heaviest rains the waterlogging problem no longer exists."