0 Aeration problems? Put an end to them 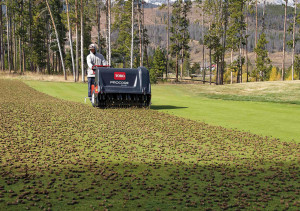 Reesink Turfcare's Trevor Chard says that aeration is widely recognised as the most important task implemented on fine turf, and there are few single procedures that can produce as many benefits for the grass. However, there can be widely differing views about what is best practice and the most effective techniques to employ.

Aeration is a mechanical operation that creates air space in the soil. It is an essential part of turf maintenance to ensure a healthier plant and results in a better quality playing surface thanks to the increase in oxygen, which is critical for root growth and ultimately grass growth, improving the rate water moves into the soil, improving drainage and relieving turf compaction and thatch build-up.

Aeration is far from being a new technique; farmers have been turning the soil to relieve compaction and redistribute the nutrients for centuries, whilst turf professionals core, tine, slit and deep tine. Which ever way, getting oxygen into the soil is a disruptive process and often the wrong operation is carried out, which can negate the positives and leave a mess behind. It is therefore important to let the turf dictate the course of aeration action and not just employ practices because that's what has been done in previous years.

For example, if thatch is the issue, hollow tining is the way to go. Hollow tining or coring is the most versatile cultivation method, meeting several conditions at once. It is the best way to control the build-up of undecomposed organic matter in the rootzone in sand-based soils through the removal of some of the accumulated fibre in the grass's rootzone. Soil 'plugs' roughly 5mm in diameter and 100mm deep from the surface of the turf are pulled out at intervals, allowing the compacted turf to expand and air and moisture to be more easily absorbed. It also allows new rootzone material to be inserted into the thatch layer through topdressing, which increases microbial action and keeps rootzone organic matter within healthy limits.

Solid tining provides enhanced gas movement between the rootzone and the atmosphere. It consists of driving a hole into the ground, compacting the soil temporarily and fills in again over time. Solid tines cause less injury to the turf, which is perfect for periods of high usage but, on the other hand, doesn't go as deep as hollow tining and, whilst it is useful for aerating the upper level of the rootzone, it won't relieve the problem of compaction.

A benefit to solid tining is that it can be carried out at any point through the year and is particularly good for sandy soil that doesn't need much compaction relief. Plus, it has the appeal of no cores and, therefore, this is music to most turf professionals ears as there is no mess to clear up!

Slitting, slicing or cross-aerating, whatever you call it, is good for counteracting thatch and causes minimal damage. It is particularly good for more sensitive times of the year, for example, summer and winter. Deep slitting is normally carried out through the winter and is done with blades that penetrate from 125-300mm and are attached to a machine pulled by a tractor. Surface slitters penetrate just 40mm. These are designed to keep the surface open during the summer months aiding water absorption.

For compaction where there is little thatch, deep tine aeration with some heave is recommended.

When it comes to topdressing, which is an important component for healing and continued playability, it's a practice best done on soil cored rather than say solid tined. The topdressing fills the aeration holes, limiting the need for excessive dragging and maximising the benefit of the aeration practice, as well as limiting disruption to play. The filled holes also provide a uniform appearance to the turf, which can affect perception of green smoothness as healing progresses.

Timing is vital when it comes to aeration. Wet conditions could cause compaction from heavy machinery and hole smearing, whilst dry conditions can limit penetration and take the turf longer to recover. Aeration schedules vary depending on soil type, budgets, resource, climate and usage and can be a balancing act for greenkeeper and groundsman to ensure the health of the soil without disrupting play. For example, it's best to hollow tine in late August or early September, summer's higher temperatures increase the need for gas exchange in the rootzone to replenish soil oxygen and remove carbon dioxide, but this coincides with the playing season at most clubs and, therefore, some will look to hollow tine very early in the spring season instead.

Generally, deep tining takes place in spring or late summer and early autumn at depths up to 350-400mm; hollow tining in late summer and early autumn up to 100mm, solid tining from March to October up to 100mm every 3-4 weeks, and slit tining when weather permits through autumn and winter up to 100-200mm. Basically, the turf will recover from hollow tining in August far more quickly than in the autumn. And, whilst the timing is perfect for sports surfaces, it's not for golfers! 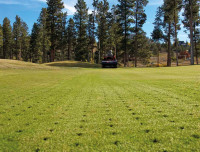 Varying the depths at which you aerate is important to avoid the formation of a compacted layer underneath the levels where aeration has been carried out at the same depth over time; an issue known as 'panning'. With aeration possible anywhere from 10mm to 400mm, it's a good idea to mix things up to prevent this.

- Regular aeration will ensure the turf is healthier and recovers from compaction quicker
- Topdressing post aeration - on a dry surface - will ensure the even, full filling of the holes. Apply a second application a few days post coring to top off the holes and maintain a smooth surface
- Rolling the turf for a day or two after aeration will improve conditions for mowing and maintain levels and a smooth surface
- Irrigate and fertilise 3-4 days after to stimulate turf recovery

Tractor-mounted or pedestrian, mechanical or air combined, when it comes to choosing the right machinery for the job there are of course numerous options and, as with all things, budget is a factor. The universal requirement though is minimal surface disruption and a machine that can be relied upon to get turf back into play as soon as possible.

The way aeration machinery has progressed over the years now means the process is so much more efficient and time-effective. From taking three people up to two and a half hours to aerate one green, these days, eighteen greens can be done in less than a day thanks to innovative product development and new technology.

Other extras that make for easier aeration are a ground following system so the machine matches ground undulation for consistent and even coring, and core deflectors which are fitted in front of the tyres to eliminate running over the pulled cores from the previous pass to make the clean up process far easier. The tractor you use for a mounted aerator can make a big difference to productivity, too. Some allow an aerator to just overlap the tread width of the tyres, meaning you don't need to run back over the same area.

Successful aeration is as much down to the quality and condition of the tines in use as it is the machine. In order to maintain your turf, it's vital to ensure you have the very best equipment and parts to hand. Clean-cut holes are important for a speedy recovery, and the best way to ensure this is with sharp, smooth, good quality tines. They produce precise, consistent holes for faster turf recovery, a smooth finish and speedier return to play by maximising core-pulling and producing a superior quality hole.

There are literally hundreds to choose from, and to suit every turf application, soil situation and season. And what you choose will be dependent on what is the right size and shape of tine for the ground conditions. For example slit, cross and chisel tines are the best choice for summer aeration on dry soil. By creating small incisions in the surface, these tines increase gas exchange, improve nutrient penetration into the soil and aid the removal of surface and subsurface water.

Or many choose 8mm hollow tines during the hot months to remove thatch build-up and again increase nutrient and water penetration. However, these small holes can cause issues with filling, in which case 12-15mm tines create holes that are far easier to fill. But tining at this size is more disruptive to the soil - there will always be pros and cons!