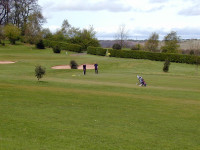 A national golf company has renewed its aeration programme on two sites in Stoke-on- Trent following a positive change in the weather.

The Jack Barker Golf Company, which owns twelve courses throughout England and Wales has recalled Terrain Aeration the compressed air de-compaction specialists, (who field the largest fleet of Airforce Terralift machines in Europe) to treat six greens on the old course at Keele Golf Club, and half of the recently re-landscaped driving range at Golden Hill.

"We had them here two years ago," says Nick Worrall, Regional Operations Manager for Jack Barker, "and we wanted them back in May but the weather's been so bad we had to wait until now." Nick, who recorded three inches of rain in a week during the height of the deluge, which has swept the U.K. this year, says that at this point one of his greens was 3ft under water. "It's sitting in a bowl," he explains "and we decided to close the main greens and use temporaries. The previously aerated greens were standing up well but we had to take a blanket decision."

The 40-year-old greens on the Keele Old Course, have a thin clay layer beneath a good level of root-zone but the problem is 14 to 18 inches of ash beneath the clay and above the drainage system. "We knew the drains were working, we've put in pipe drainage ourselves, but on the untreated greens the water was just not getting through," Nick continues. "This ash layer had become locked because the silt had built up and washed through. We've got a verti-drain on site but we needed something that would penetrate deeper. The advantage of this type of aeration process is that it operates from a depth of one metre, penetrating almost any soil structure, without disrupting the surface."

Terrain Aeration's Steve Oates treated the six greens using the company's Airforce Scamper Terralift machine, inserting the probe one-metre below the surface and injecting air under pressure to create fractures and fissures in the root zone. Dried, milled seaweed was injected on the final air blast, which will expand when wet, keeping the new air channels open. "We were working at virtually full pressure - 17 to 18 bar on all the greens," recalls Oates, "and there was a good movement of air throughout the root zone."

Golden Hill Golf Club and Driving Range was taken over by The Jack Barker Golf Company three years ago. "The course was finished in the 1980s, and all the greens are U.S.G.A. spec. and drain well," continues Nick. "But driving range was very compacted. The site had a one-in-three to one-in-four slope and the structure was not good. We had to level it and it became compacted. We needed to open it up a bit to encourage germination, because our over-seeding programme is ongoing. Terrain Aeration treated half of it last time they were here and this time they finished it off. At the end of the day, if the aeration treatment didn't work we wouldn't have had them back."