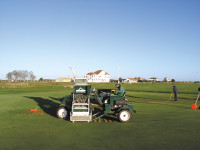 This summer's disastrously wet conditions with persistent rain often coming in very heavy bursts has caused drainage headaches for course managers around the country. Flooded and puddled greens mean that temporary pin positions have been much in evidence, members and pros have been disgruntled and tourists have stayed away in droves. Courses which have slow draining greens due to an impermeable surface layer - whether it be due to soil type or thatch - have been dogged by closures which do not help either their turf condition or income stream.

Problems relating to poor drainage, in particular flooding due to slow infiltration rate, can be alleviated and often cured by Ecosolve's Drill n Fill aerator. This is a self-powered machine that can operate in conditions that would halt lots of other equipment. The drill bores down through the troublesome surface layer, extracts and backfills with material which holds open the drainage channel below the surface, allowing percolation of water through to freer draining soil beneath.

Weather conditions this year have meant that the machine really came into its own. Meyrick Park Golf Club in Bournemouth was one to reap the benefit of this type of aeration in March 2007. With a Pay and Play element to its operation in a busy tourist spot, the club would be financially inconvenienced when it had to close greens and/or use inferior temporary pin positions.

This would normally be the case at the course which suffered from puddling and poor drainage after one to two days' rain. This spring, Head Greenkeeper Ray Mitchell had three greens drill filled to a depth of 310mm using 20mm diameter drills. Backfill was an 80:20 mix of sand and Ecosolve's own zeolite-based soil amendment, Sportslite. He was delighted with the results. Despite the rains, and even after what we had on July 19th, greens were open all summer. "There was no puddling and no temporaries."

Although Meyrick Park's greens have a free-draining sandstone subsoil, the surface is clay-based and water could not get through to the drainage layer. The idea was to create a link between the two (see photo). Water percolated freely through to the sandstone leaving a putting surface clear of water. 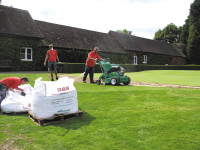 "The aeration was really good and effective and our members and club pro noticed the improvement in playability," says Ray. This winter will be a testing time for visitor numbers but he is optimistic because the greens held up so well during the wet summer. He has booked the same work to be done on three more greens this autumn. "We started with the wettest and will work through the others."

The aerator works by removing soil with the drill, allowing lateral movement within the rootzone and releasing compaction pressure. Deep penetration breaks through any sub-surface hard pans, thatch, black layer and rootzone - subsoil interfaces, thus increasing aero-porosity. "Turf which has been dogged by slow draining surface water can be transformed," says Ecosolve technical director Bretton King "whilst water percolation within the rootzone also improves too."

The fluted tungsten carbide drills ease into turf without the further compaction - inducing impact of other systems and the small folds of tufted turf around the hole's perimeter can be brushed back into place afterwards to allow rapid healing. Holes can be backfilled with the appropriate soil amendment - sports sand, Sportslite, Profile, Axis or a blend, to maintain the improvement.

The floating drill head follows the playing surface ensuring a consistent drilling depth which can be varied according to the exact needs of the turf. Deep holes within the rootzone encourage deep rooting and the selection of drill channel sizes vary from 19mm to 32mm. These channels are then filled with the soil amendment material directly by the machine. The newly created drainage channel then facilitates nutrient exchange between the amendment and the grass roots. Playing surfaces can be fully reinstated in as little as one hour causing minimal closure of facilities.

Ecosolve will organise the entire operation, assisting with advice on backfill detail, drill selection, backfill manufacture, right through to delivery of a golf club's chosen backfill. A club's own resources can be utilised in the operation on the day, when the system can be mechanised to a large extent if the right equipment is available. 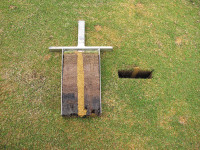 Greens staff are employed to manage the clearing up operation, when use of core harvesting kit and dragmats or brushes lead to very rapid clearance times. One of the key successes of Drill n Fill aeration is the ability to tackle problems using simple and cost-effective technology. The equipment used in the process is frequently sitting within the 'armoury' of a course manager's shed and his course-specific knowledge, together with Ecosolve's expertise, is invaluable in achieving optimum problem alleviation.

In the past, aeration jobs have sometimes been hampered by difficulties in, first, obtaining the correct blend of products for backfill and an individual's club's requirements and, second, getting it delivered to the right place at the right time. To avoid this, Ecosolve has launched Bespoke Blending and Bagging (BBB), a service which provides a precise customised blend of top dressing and backfill in hygienic, controlled conditions at its centrally located plant in north Wiltshire.

For the first time, the sports turf manager can be supplied with very specific blends that are uniform and replicable. They can include any type of sand blended with zeolites, ceramic clays, diatomaceous earths and with the addition of micronutrients such as seaweed meal, mychorriza, dried blood or urea, accurately mixed in amounts as small as 0.1%. These blends are ideal for use in hollow tine aeration, Dryject, Graden sand injection and Drill n Fill.

BBB produced an 80:20 blend of Axis and sand for use with a Graden sand injector and linear aerator. This was used to excellent effect this summer at Blackwell Golf Club in Bromsgrove. "Axis has the property of both retaining moisture and improving drainage and the process removed thatch, so after overseeding, germination was much better" says Course Manager Peter Fletcher.

"Three years of solid tining on the main greens had left vertical channels. Using the Graden created horizontal channels to link the whole lot together. It definitely worked - you can feel the difference. The greens surface has firmed up and the inch of rain we had one day soon after the aeration went through very quickly," adds Peter.

During this summer, Blackwell had a problem with its pop-ups and the greens were not watered, "but they've held up well." The greens recovered quickly after summer play and Blackwell is hopeful they'll be good for winter. He's using the two bags of amendment left for hollow tining over those months. "Applying it was hard work but the service from BBB was excellent, we could never have mixed it ourselves and we are thinking of doing the same next summer with a 10 per cent Axis blend" adds Peter.