0 Aeration – the next generation 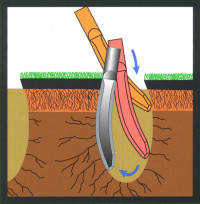 Sometimes it is hard to avoid cliché; by the very nature of language a cliché is born because the words just work. It is hard therefore to get away from some of them, like 'the next generation' for example…

And here is a prime example; the PlanetAir aerator from Minnesota based manufacturer, Dave Maas is designed to offer 100% soil movement in the rootzone in the course of normal maintenance regimes and to do so without any surface disturbance - thus its usefulness on the golf course (both fairways and greens) is immediately apparent.

While the likes of the Graden Sand Injector have cornered one particular market and the Gwazae deep aeration treatment appears to have cornered another, there are myriad machines that claim to aerate 'just so' but nothing that is honest to goodness 'revolutionary' has turned up in quite a while. In fact most people are still using the Verti-Drain as their aeration option and for good reason - it works. Up to a point…

Dave Maas does not see his PlanetAir machine taking over from Verti-Drain however; "The PlanetAir is the long-awaited complement to Verti-Drain, we can maintain the connection between the surface and those deep drainage holes that the Verti-Drain creates. The key to PlanetAir is the amount of oxygen that gets into the rootzone during treatment - we can get through 18 greens in four and half hours using just one operator and we create 1,000,000 holes per hour."

All of which sounds impressive but the cynical among us will just view it as mere statistics. What is more interesting is the science behind the process and the reason for performing it in the first place: the United States Golf Association (USGA) research into organic matter proved what most of us already know - that the organic build up in the surface zone is what controls water infiltration rates. What was more illuminating was the findings that core aeration alone could only attempt to prevent organic matter build up for five to eight weeks - and this with considerable disturbance to surface and irritation to golfers.

Where PlanetAir scored so highly was that the Saturated Hydraulic Conductive (SHC or water infiltration to most of us) could be restored immediately with a treatment and can be continued throughout the growing season as most golfers did not even notice that the greens had been treated at all. The PlanetAir treatment works in conjunction with both biological and mechanical processes: by allowing oxygen into a large percentage of the rootzone, the beneficial microbes that destroy the thatch layer are stimulated and kept healthy. Moreover the bevelled knives of the machine perform another task as Maas points out, "The surface and subsurface lateral growth of roots stolon and rhizome make up thatch accumulation. 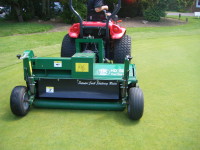 Frequent PlanetAir treatments prevent this lateral growth, thus preventing thatch. Also, each and every time we cut lateral growth we stimulate fine textured juvenile vertical shoot growth in the parent plant. This means that greens become finer textured with better colour, round tine aeration cannot do this."
It is useful to think of the PlanetAir treatment as being a cultivation of the soil - a kind of subsurface disruption that gives all the benefits of 'digging over' the soil but without disrupting the surface.

Maas is convinced that this is where the more traditional tining falls down; "Round tines tend to 'glaze' the edge of the hole that they create and this causes water to stream through the soil. In such 'water streaming', 70% of the water touches only 30% of the soil. By comparison the PlanetAir treatments cultivate the soil; the water connects and percolates properly through the soil and this rapid water percolation through the soil particles is the oxygen delivery system to the plant roots and soil microbes. It is for this reason that USGA researchers see high water drainage rates from deep tine machines as having very little benefit. Water simply streams past the soil. Water needs to connect at or near the surface and rapidly percolate through the soil particles for the full benefit of aeration to be realised."

So the science of 'why' is fairly clear and the USGA research is more than happy to back it up. But how does it work? Anyone lucky enough to have bumped into Maas at the Golf Industry Show in Florida would have seen a groovy little mechanical demo that showed the knives on a geared crank (a planetary gear as Maas calls it) working through a glass section of marbles. It is the lateral and linear movement of the knives created by planetary gearing that creates the unique movement of the blades and the incredible movement of subsurface soil. "This machine works like the Spirograph toy we played with as kids" explained Maas "When we turned the handle of the toy it turned one cog which, in turn, caused another cog to make the spiral patterns on the paper. Our 'sun drive' turns in one direction but the PlanetAir drive then turns the four knife shafts in the opposite direction - the direction of travel."

The speed of operation also dictates the amount of subsurface disruption that the machine imparts; thus the greenkeeper is able to determine exactly how much of a treatment each green or fairway requires. The key to it all is a surgical precision that would make most engineering manufacturers green with envy, the surgical reference is not lost on Maas, "It's a lot like arthroscopic surgery, the machine makes a small hole on top but a larger one underneath to work within. The churning motion of the knife within the subsurface pocket shatters the soil profile to extend the effect beyond the immediate area. The only visible result on the green surface are rows of small incisions that look like stitches from a sewing machine."

Moreover the PlanetAir is equipped with front and rear rollers to follow undulations and firm up the surface - just another detail that makes the process so worthwhile and an effective use of time.

With dozens of courses across the USA switching to the PlanetAir it is only a matter of time before the process is seen across Europe, especially as the European rights have been bought by R&K Kensett, the importers of Graden and Gwazae machinery. "I always go the USA show to see if there is anything worth looking closely at," explained Keith Kensett from his Surrey base, "but the last few years I have been taking stuff over there myself and showing the Americans the latest ideas.

This time though I have come away with a real winner; the PlanetAir is exactly what we have been looking for over the last five or six years - the latest part in the jigsaw of aeration. We already have Verti-drains and corers, I've brought in the best linear aerator and sand injector along with the virtues of deep aeration from the Gwazae; but now, with the PlanetAir, we have got the most 'hi-tech' and effective tool available. It won't replace the other machines necessarily but it will certainly make a huge difference to turf quality."