With a three day concert booked at the end of July and pre-season games starting just ten days later the club followed an ever more popular route of re-turfing, by installing a new surface at Dean Court 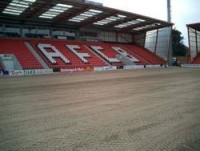 The new pitch is a LokTurf construction, provided by Kestrel Golf and Sports, who had been referred to AFC Bournemouth by Leyton Orient after constructing two LokTurf goalmouths for the South East London Club. 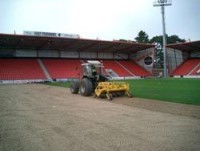 The turf was grown up in Yorkshire on Lindum Turf's fields as a joint venture and due to the unique way that it is grown, enables a new LokTurf pitch to be harvested within six months, reducing the establishment time by about 8 months for ready to lay surfaces.

On the 2nd of August, Kestrel stepped in as the staging was still being removed to strip off the top 20mm of vegetation using Koro machines. Although the stage took longer than envisaged to remove, they were able to work around this and started to spread 256 tonnes of concentrated LokSand over the exposed rootzone. This was then cultivated into the first 80 mm of the existing rootzone to become the reinforced top 100mm of the pitch.

There was an application of Rigby Taylor's Activate, worked in to the upper rootzone as well as a pre-turf fertiliser of 6:9:6. The area was then laser graded to provide a level surface in readiness for the custom grown turf. The turfing started on the Tuesday evening (due to late stage clearance) and was completed by the Friday.

One of the problems that they had to overcome was the very hot weather. This made it imperative that there was the shortest possible time between harvest in the 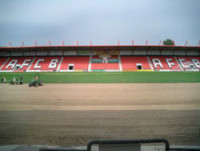 As soon as the turfs arrived on site in the afternoon they were unloaded and laid using the new BRL 120 machine and up to eight staff to facilitate the movement of turf to the machine, pitch level adjustment and edging up. The turf was harvested in roll lengths of 10 metres and 1.1 metre widths. Normally rolls would be fifteen metres in length, but with the very hot weather and long journey time it was felt that the reduction of roll size would help the turf from becoming heat stressed.

There was some snagging and finishing off to do on the Saturday morning, before the Ground staff could start the maintenance regime in preparation for the Tuesday evening game. The turf required no more than the Dennis mowers to bed the turf in nicely for the match three days later. 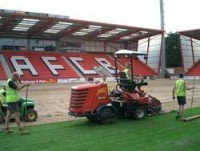 There are currently approximately another 24000 square metres of LokTurf being grown in Yorkshire, available for future pitch surfacing. The method that the turf is grown allows a much shorter establishment time than traditional methods.

Turf grown for winter sport is harvested and then washed, removing all existing soil. This bare washed turf is then laid directly onto a field graded out using LokSand and grown on. Establishment of the turf using this method is accelerated taking just six months before it can be lifted for use on a winter sports surface. More standard systems usually take about 12 -14 months to reach maturity.

The potential for clubs to bring in additional revenue in the closed season can be realised by having the fall back of ready to play reinforced turfing systems like LokTurf.

The system that allows multi-use of the facility for two and a half summer months, be it commercial matches, concerts or marquees, removes cost of renovation at the end of the season and provides a new surface at the start of the next season.