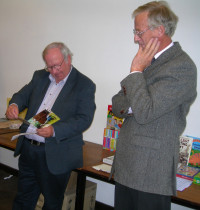 Keith started with SISIS as Area Representative for the North West, later moving to Scotland as Manager of SISIS Scotland. After a very successful few years there he returned to Macclesfield to become UK Sales Manager.

Keith was presented with vouchers so that he can add to his very extensive range of fishing equipment. He is now hoping to spend more time relaxing at the side of a river - and hopefully catching some fish!!