0 After the floods: A fish rescue in action!

Ever wondered what happens when fish get stranded by floods and have to be rescued? John Cheyne found out for himself recently, as he joined Environment Agency staff on the River Severn to witness the important work they do, along with some surprising catches. 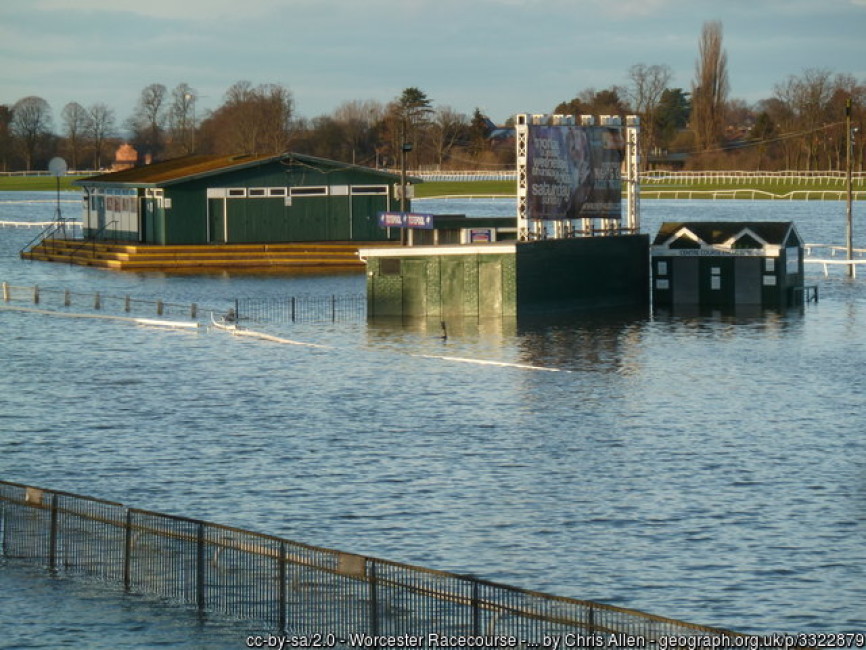 Worcester Racecourse, which is flanked by the River Severn, is one of the places that fish can become trapped by receding flood waters

It feels like we are lurching from one national emergency to the next at the moment, but while the majority of press attention is focussing on the spread of Coronavirus, there are dedicated professionals out there still coping with the aftermath of the recent floods. I think it's really important that anglers understand exactly what work their fishing licence money funds, so I tagged along with the Environment Agency Fisheries Team based in Tewkesbury who cover Hereford, Gloucestershire and Worcestershire to see them in action protecting our fish stocks in a very direct way.

When rivers flood they naturally spread out on to the floodplain and, in an attempt to keep out of the increasing rates of flow, many of our fish species seek sanctuary in these less turbulent waters. On the whole fish are pretty good at moving back into the main river as the flooding recedes, but in certain places they seem to struggle to time their return correctly and find themselves marooned in standing water pools left on the floodplain. Without help these fish will almost certainly perish. The water in the standing pools will slowly drain away leading to low oxygen levels as it gets shallower and shallower and all the while, the fish are easy prey for predators.

Thankfully Environment Agency Fisheries Staff have been aware of this issue for many years and have an excellent knowledge of where these strandings are liable to happen. Pitchcroft Racecourse next to the Severn at Worcester is just such a place and I was fortunate enough to be offered the chance to lend a hand to the Environment Agency team who were tasked with saving the fish who had become trapped on the Racecourse. 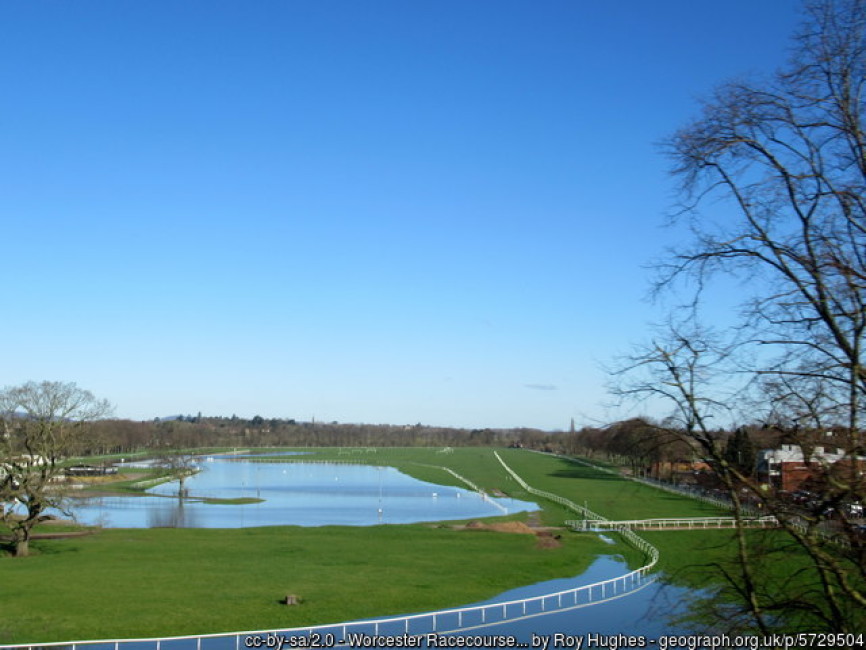 "The timing of when we move in and try to return the fish to the river is key" explained Jim Seymour, one of the Fisheries Technical Officers from the local EA Team. "When the river first recedes at Worcester it leaves a huge lake, which would take many days and many members of staff to effectively deal with. However, if we leave it too long the fish will begin to get more and more vulnerable. So we have to time it just right."

So, I waited for a call patiently hoping to hear when the rescue would take place. That call came early the next morning and within a short drive I was arriving at Worcester Racecourse to see that the EA team were already in action, pulling a seine net through the huge standing water pool.

As the net was pulled slowly into the side I could see immediately that some good sized fish had been captured. The haul included three pike, a carp, a bream or two and a large quantity of roach, dace and bleak. While I helped hold the net with Sam, Laura and Jim carefully transferred the fish captured to a large aerated tank, where they could be held safely prior to release back into the river. 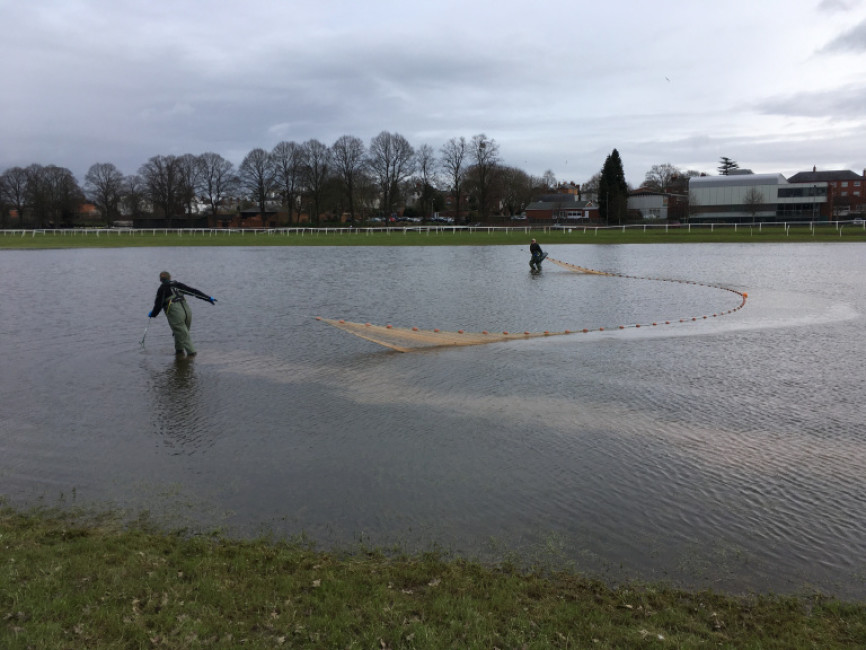 For the uninitiated, Seine nets are basically a bit like huge tennis nets with weights on the bottom of the net and floats at the top which are ideal for safely removing fish in these circumstances

For the next few hours I helped wherever I could (mostly by trying not to get in the way !) as the EA team professionally and efficiently made sweep after sweep with the seine net. Sometimes very few fish would be caught from certain areas and at other times the numbers and sizes of the fish being rescued were staggering. The roach in particular were mostly of a lovely stamp, with not only stacks of fish between 5oz-8oz but a good number that were much bigger and would certainly be pushing 2lb.

Almost all species that you would expect to find in the middle Severn were present including plenty of gudgeon, a few bream, perch around a dozen pike and even a rather lost looking crucian. The only coarse fish conspicuous by it's absence were barbel, but then they are happy to get their heads down and stay in the main river as they are such strong swimmers. It was also good to see a few Salmon Parr in amongst all the coarse fish.

Salmon numbers have dropped dramatically on the Severn and indeed almost all UK rivers in recent years, so it was great to see a few juvenile fish, proving that successful spawning is still taking place.

So many fish were caught that the big holding tank had to be emptied twice, to ensure that the fish were not overcrowded. The final journey from the holding tank to the river is a manual job, so I was finally able to properly lend a hand (skill required ?..carrying a bucket) it was at this point that we took the opportunity to take a few pictures of individual fish.

There were a number of carp, both commons and mirrors released, the biggest of which all went back quickly and without being stressed further by being held up for photographs.

In some ways it would have been nice to get the chance to take more pictures, there were some amazing specimens, but Laura was keen that we kept the well-being of the fish as our priority. Having been trapped in receding water for days, netted, transferred to a holding tank and then decanted into large trugs for their final journey, these fish have had enough stress to last them a few months, so we kept the photo-shoot to a minimum and concentrated on that fantastic moment when they are released to swim off safely back in the main river. 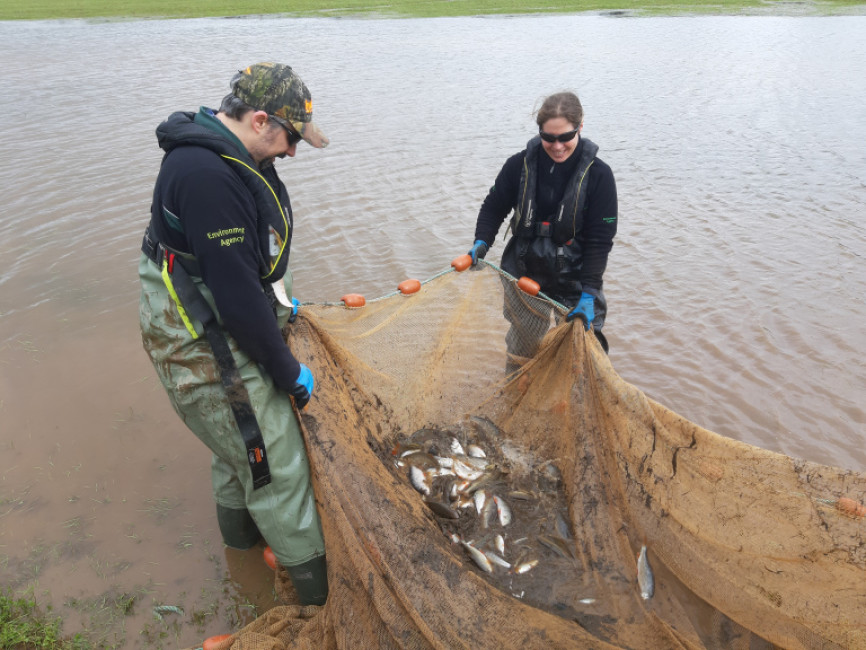 Sam Chapman and Laura Bullock with a huge number of quality roach, Dace, chub and many other species

What to do if you see trapped or stranded fish

All in all it was a fantastic experience getting to see Laura, Jim and Sam in action and feel I contributed a little bit to saving some beautiful fish from perishing. Fish Rescues like this are carried out by other EA Fisheries teams all over the country and are just one of the ways your fishing licence money is used for the good of fishing. So what is the best course of action if we are spot fish stranded by receding floods?

Here is our quick guide:

My personal thanks go to Laura, Jim and Sam and to the Environment Agency itself for access to many of these pictures.