by total-play
in Cricket and Synthetics
on 30 Jun 2014 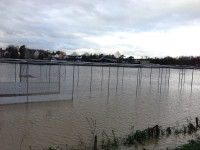 With the wettest winter on record behind us, sports surface specialist total-play Ltd offers advice on what cricket clubs should be doing now to help rescue flood damaged natural and non-turf facilities when the need arises

For cricket clubs, flooded grounds can be not only disruptive but costly; especially for those that do not have flood plans in place. This feature looks at the implications of water damage for both natural and non-turf facilities and advises on the steps clubs should take now to give flooded surfaces the best chance of being in a playable state in time for the 2014 season, with a case study on how we helped a club rescue a flood damaged practice facility at St Asaph CC in Denbighshire last year.

In addition to the more obvious effects, like soaked and dislodged carpet, flooding can impact non-turf pitches in ways that may not be immediately visible to the untrained eye. One of the most subtle effects can be the disruption of the surface's aggregate base construction.

Waterlogging can shift aggregates around and even water moving up through the surface can transport very fine particles through the layers. 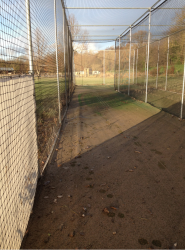 This can result in unbalanced surface levels which, in turn, can produce an inconsistency in bounce; directly affecting performance.

Flooding can also displace both shock pads and carpets. This generally depends on the fixing method and type of carpet used - however, carpets generally tend to float, which means they become stretched and do not regain their original tension.

Once floodwater has subsided, there will be a lot of contaminants left on the surface - detritus can include anything from pieces of stone, glass, plastic to very small silt, sand and clay particles. Whilst larger pieces of debris are easy to remove, by brushing or blowing over the surface once the water has subsided, small particles are harder to remove and can inhibit the system's drainage capabilities.

Impact of flooding of natural cricket tables and outfields

Natural grass cricket tables and outfields can be just as adversely affected by flooding as non-turf systems and, again, it tends to be the less visible effects that can have the most long-term impact.

Here, the major risk is from contaminants - particularly tiny particles of silt that can 'cap' off the soil surface, reducing porosity and, therefore, the drainage of the facility. This inhibits grass growth and, in turn, reduces the durability of the surface. To discover whether silt or pollutants have affected a square, it is necessary to pH test the soil post flooding. If an issue is detected, it is likely that the pitch will need to be fraise mown, scarified, re-seeded and cultivated to provide the optimum conditions to encourage grass growth. 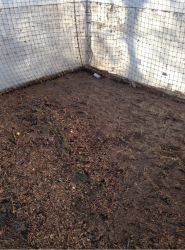 - Stay clear of the site until water has subsided and it is safe to enter
- Assess the damage and thoroughly list all equipment and facilities that have been affected
- Engage the services of a professional grounds operative to thoroughly assess the damage to playing surfaces - both natural and non-turf - and advise on any remedial works
- Contact the club's insurance company
- Put together a clean-up 'task force' and assign jobs like pumping out water. Clearing large debris from the ground is something that the whole club can pull together to achieve to help prepare for when the specialists start work
- If you haven't already got one in place, ensure you compile a flood plan in case of future inundations - a good template can be found on the ECB website - www.ecb.co.uk

Both the ECB and Sport England have set aside funds to support clubs affected by flooding; calling on the advice of playing surface experts not only minimises the risk of the 'invisible' effects of flooding being overlooked, but can be of valuable support to funding bids. total-play's James Coney - a former Sports Development Officer and grant funding consultant - says: "We'd strongly advise clubs suffering flood damage to seek expert advice before undertaking any work themselves. Not only can this ensure that the 'invisible' effects of inundation are spotted and can be dealt with accordingly, but impartial third party advice is key in helping clubs secure funding for repair works." 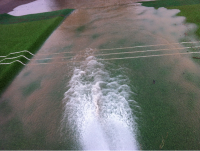 "St Asaph did exactly the right thing by calling us in; checking and re-levelling the system's base and, in particular, re-fitting the carpets to achieve the correct tension is tricky and requires specialist knowledge and equipment. However, the fact that we were able to put right the damage in a relatively short timescale after a serious inundation shows that flooding needn't necessarily mean the complete replacement of a facility. This kind of expert insight can ensure the best course of action for your club and, in turn, support bids for funding."

For further advice on flooding, or to arrange for a visit to your site to assess flood damage and offer free, impartial funding advice call 01604 864575 or visit www.total-play.co.uk 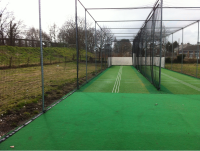 St Asaph Cricket Club, one of the oldest in North Wales, suffered extensive flooding to its ground when the River Elwy burst its banks back in November 2012; a catastrophe that affected some 500 homes in the area and, tragically, caused one fatality. The club's entire field was under three feet of water for four days, destroying the pavilion and causing irreparable damage to ground management machinery in the garages. The inundation also affected the club's new non-turf practice nets facility which had been installed by total-play just six months prior to the flood.

With two senior teams - the first 1XI playing in the ECB Premier League and the second 2Xl in Division 3, plus a very active youth section, the club's priority was to get its facilities back in use as soon as possible after water subsided. Club Chairman Gareth Ryan says:
"We initially contacted total-play to discuss the damage inflicted on the practice facility by the flood and what the recovery plan could be. Their response was immediate and, having seen close-up photos of the damage that we sent over, the decision was made that the carpets needed to come up to allow them to be cleaned, the base inspected and relaid. All remedial work was completed within six weeks of the flood and we were able to use the facility for practice in the run up to the 2013 season."

In order to bring the damaged non-turf practice facility back to the exacting standard to which it was installed, total-play undertook a rigorous, step-by-step process of cleaning and re-laying the components: