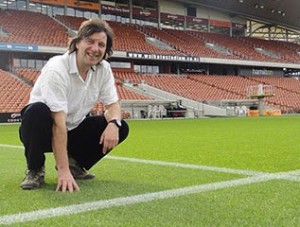 In March 2013 I was the guest of PGG Wrightson Turf in New Zealand, a major supplier of turf technology products worldwide. The trip was to learn about 'Avanex®

Endophytes are fungi that live in a symbiotic relationship with certain grasses and confer various advantages to their host in exchange for nutrient and a place to live. The association of grasses with endophytes is an entirely natural phenomenon that has probably been around almost as long as grasses themselves, that is between 30 and 60 million years.

PGG Wrightson have developed and patented two grass types that contain specific endophytes. The trade name for each particular combination of grass cultivar and endophyte is Avanex®.

These grasses, due to the formation of certain alkaloids by their associated fungi, are distasteful to birds and insects that may feed on them. So these creatures tend to avoid these grasses.

The seed formulations were developed simply by screening among naturally occurring endophytes and transferring the more useful fungi into cultivated varieties of grass. The grass species they have been most successful with are the C3 (cool season) grasses perennial ryegrass and tall fescue. Both these species have their uses in the amenity grass market and perennial ryegrass is of course a particularly useful species for sports turf with or without endophyte.

PGG Wrightsons' major thrust so far has been to establish Avanex® tall fescue at airports. Within the aviation industry there is a constant drive to reduce bird visits to airports so as to avoid the normously expensive and sometimes dangerous phenomenon of bird strikes with aeroplanes. Large expanses of grassland have been created at airports in New Zealand using Avanex® tall fescue and this has been shown significantly to reduce bird strikes. So the planes are not damaged by the birds (and vice versa!) and the birds themselves, because they have no desire to eat the grasses or the reduced populations of insects associated with them, stay away from the runways and dine elsewhere.

Avanex® and sports and amenity turf Endophyte technology has not been widely used or even tested in Europe as far as I am aware though it has been very much a part of New Zealand's agricultural industry for several decades. I was surprised by this.

Having seen the potential in the field of sports and amenity grassland, Agrostis are keen to work with PGG Wrightson to establish a European evaluation programme. If, as the New Zealand data suggests, Avanex perennial ryegrass in particular could be demonstrated to be resistant to insect infestation, by for example, leatherjackets and/or chafer grubs, the benefits for the sports and amenity turf industry would be enormous.

Avanex ® and the environment At first glance, this technology may appear to be contrary to the principles of enhancing biodiversity. But, in the case of airports, it should be recognised that these ® tall fescue be found to be 100 % resistant to insect pest infestation (actually quite unlikely) it could be argued that this is also contrary to the principles of enhancing biodiversity. However, this ignores the fact that turf managers actually spend enormous amounts of time, money and effort deliberately reducing bio-diversity in many situations. They do this largely through the use of chemicals - herbicides, fungicides and insecticides.

Given that these are widely considered to be damaging to the environment (see for example the recent controversy over nicotinoid insecticides and their possible effects on bees) it would seem to me that a grass that was both a naturally occurring phenomenon (no GM here) and required no insecticide input would be a very good thing indeed.

Further concerns have been raised regarding the possibility of a grass/endophyte combination jumping ship and causing chaos in the natural environment. Analogies to plant diseases such as Dutch elm or ash die-back spring to mind, or alien takeovers such as Japanese knotweed or water hyacinth.

Such events occur when continental boundaries are crossed; a species that has evolved on one continent is transferred by human activities to another the environment of which has not adapted to accommodate it. In the case of both Avanex tall fescue and Avanex® perennial ryegrass this should set European minds at rest because both these grasses are native to Europe where they continue to evolve. So, if they were ever going to be a problem they would be one in far away New Zealand, not on their home ground.

Similarly, the original endophyte incorporated into Avanex ® tall fescue came in fact from France where it was found living quietly in the natural environment. If these grass/endophyte combinations were ever to become a problem they would have done so before now and they would have done so in New Zealand, to where they were taken, not in Europe, from whence they came. Remember that almost all of the grasses used in sports turf situations throughout the world actually came originally from Africa (C4 grasses) or Europe (C3 grasses).

All this is apart from the fact that turf managers don't usually allow their grasses to go to seed anyway as they are always mown too short and too frequently.

As mentioned above, we're keen to work with PGG Wrightson and establish some trials of these grasses in the UK in the context of their use in the wider European sport and amenity market. Retaining the endophyte within the seed during seed distribution and sowing requires care as the association is rather a delicate one at this stage, although it is robust once seed has been sown.

This means that, in order to protect their product, PGG Wrightson require only accredited consultants to advise and specify the most appropriate means of achieving the advantages of the technology in any given circumstance. I am proud to say that, having attended the programme of seminars and demonstrations in New Zealand, I am now such an accredited consultant.