2 Aiming for the Perfect Pitch

Spring! The time of year when all ground men fear the sound of Big Bertha cranking into gear.

Yes it's time, to dust down the cobwebs and stoke up the coals, for Big Bertha is about to roll. STOP! This is not what the Doctor ordered; take another look at what's in the shed, maybe a lighter machine could be utilised instead.

Ok, less of the poetry and on to the more serious topic of Rolling Cricket Pitches.

Spring is the time when most groundsmen consider the big issue of which roller to get out when starting their pre -season rolling. In most cases though, many groundsmen have already started consolidating their squares by controlling grass growth as part of their closed season maintenance programme (weather permitting).

This article is not about the pros and cons of rolling, but a snap shot of trying to produce better and more consistent cricket pitches.

Rolling isn't the most exciting part of the job in a cricket groundsman's calendar; It can be boring and mind numbing to some degree; but vitally essential to the process of producing that elusive Perfect Pitch.

In 1995 an investigation into the properties of pitches, including grasses, ball bounce and deviation was commissioned. Research into the relationship between soil moisture and rolling could be the next step towards a Perfect Pitch; the equal balance between bat and ball.

Why do we roll?

Rolling plays an integral part in the process of cricket pitch preparation. It can improve the performance by compacting the soils, reducing live grass coverage and producing a smoother, uniformed surface.

By understanding what your rollers can and cannot achieve is very important. Knowledge of soil compaction, moisture content and soil swell and shrinkage, coupled with the importance of allowing pitches to dry, is all part of good pitch preparation.

This then provides for better pitch safety and performance. Good preparation goes without saying, all things are possible but the pitch does not decide the outcome of the game.

The aim of rolling a cricket square is to compact the pitch so that it is harder and more consistent. The harder the pitch, the less deformity will occur on ball impact, resulting in more pace and bounce. Rolling is part of good pitch preparation, not the most single source of producing great pitches.

Compaction is quantified by measuring the dry bulk density of a pitch. Density is the mass of dry soil measured in grams, in a fixed volume cm3; when soil is rolled it is compacted vertically, squeezing the soil particles together.

This reduces the volume taken up by the soil, resulting in a rise in density and the pitch becomes more compacted. Because the particles are closer together they cannot separate as easily when the ball strikes the surface, thus the pitch is firmer or harder with good bounce and pace, reducing the risk of cracking.

Pore spaces are either filled with water or air. When the soil is compacted through rolling the quantity of water changes. This is vitally important as, when rolling is performed, there is not enough time for the water to evaporate from the pore spaces. The only way of compacting soil is by compacting the air. Mineral particles cannot be compacted, nor can water as it is solid mass and is incompressible. Only AIR can be compacted.

There also needs to be optimum moisture content during rolling too. If the soil has dried out to much, the pitch will be too hard and strong, further compaction cannot take place. The same principles apply also if the soil is too wet.

Due consideration should also be given when pre-season rolling or preparing a pitch for a match. When clay soils get wet they absorb water and the clay particles swell; when the soil dries out and the water is removed the soil particles shrink. Shrinkage, due to drying by use of rolling, is an effective way of producing hard fast tracks.

Groundsmen need to balance drying for shrinkage, firmness and the response of the ball against the effects of drying and cracking. Too dry and the cracks deform and the pitch becomes unstable. Too wet, the pitch will be soft, slow and possibly dangerous. The art of cricket groundsmanship is to balance soil moisture with pitch playability.

Rolling Potential
Rolling potential is dependent on the roller weight and the contact area with the soil surface. The consolidation depths which any roller can achieve are solely dependent on weight. Check your square is receptive to rolling before taking any machine onto it. There still maybe some hollows that are holding water under the surface and these need to be visually checked out. Paddling up the surface will do more harm than good. Patience is in the eyes of the beholder. 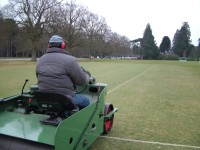 he old saying goes that "the slower you roll the more you consolidate". This may be the case, as the slower you roll the more moisture is drained from the pore spaces and the pitch dries out. The problem here though is that water moves very slowly through the clay soils, resulting in the square needing to be rolled very slowly in order for this objective to be achieved.

Most rollers cannot go that slow, it is near impossible, this is why we make multiple passes over the square/table in different directions at a consistent speed in order to dry the soils out to its maximum potential. Then, allowing for drying time before the process is repeated. There is no reason to over roll a pitch or square if it has already reached optimum drying potential.

During pre- season rolling this factor is very much in evidence as the soils are loaded with enough moisture for consolidation rates to be achieved. Which roller do we use you may ask? Well, that's down to the soil conditions as previously mentioned, but can change depending on the geographic location. The further north you are the later in the spring that you may want to start rolling. Don't start too soon, it could be time wasting, costly and could cause horizontal soil movement. At whatever point in the spring you start, observe your soil conditions.

Having weathered Mother Nature through the winter, bulk density of the square may have been reduced. If autumn renovation work was completed then some form of aeration or de-compaction would have been carried out, this will also reduce density. If no pre-season rolling has been performed the soil would increase in density slowly during its drying process, but early pre-season rolling and consolidation of the surface will help reduce irrigation of the soil from rainfall, thus enabling a quicker natural recovery of soil density as it dries. There is no such thing as "no need for pre-season rolling".

Start your pre- season rolling with a light pedestrian roller (500kg); using the Union Jack system roll the square once from corner to corner, remembering always to return down the same line of roll. Turn off the square if you do not have a reverse gear to your machine.

Allow a couple of days for the square to breathe before repeating in the other direction. This should be enough to consolidate your table and reach rolling potential. This may take a couple of operations. Resist the temptation to continue rolling if severe creasing is in evidence (compressing of the surface). Conditions may be too wet! If you do not have an intermediate roller, e.g. 1000kg, then add some ballast to the light roller and roll across the square, we do not want to create a nap as this will effect the ball movement/swing during a match.

Moving up to the heavy roller 1700kg to 2000kg, repeat the same principles as with the previous weighted rollers. Allow for drying time after each operation. This may be only one day as the square starts to dry out. By finishing your rolling in line of play this will assist in the pre-match day pitch preparation, and help to ensure even compaction across the square is been achieved.

Following the principles discussed above, with the right skills and equipment you should be able to match your rolling practices to your pitch preparation. When preparing match pitches, try to be as realistic as possible about the quality of surface you can produce. Work within your limitations and don't expect too much of your square. Knowing what your soil consists of is a vital management tool. Regular soil sampling and analysis will provide you with this information. The maximum achievement for soil density is the function of its clay content.

As the clay content increases, the soil density increases with compaction. High clay content pitches 27 - 35% require more intensive work regimes. To produce pitches to this level you will need all the components in your favour; moisture content, minimum thatch, the right types of rollers, covers equipment and probably full time staff to administer them.

It is futile to try to achieve First Class pitches with a substandard constructions and inadequate machinery. Wait for the right moment and limit the time spent on the roller. Choose wisely to avoid disappointment. The drying process speeds up as weather improves and summer approaches. The availability of roll on roll off covers will aid the rolling practices by retaining vital moisture in the soils, a key element in the preparation for that Perfect Pitch.