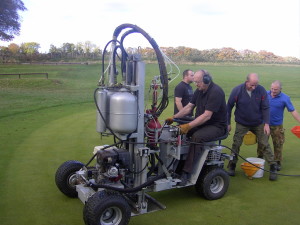 Returning from treating Yew trees at the Battle of the Boyne site in the Republic of Ireland, Terrain Aeration's David Green had his own fight across the Irish sea in the face of Hurricane Gonzales. He finally arrived at Southport and Ainsdale Golf Club with the Airforce Scamper Terralift machine to contribute to the end of year maintenance, at the behest of Course Manager, Tony Rimmer.

The Terrain Aeration machine was used on the greens to hammer a hollow 3.8cm (1½") probe into the soil to a metre depth and then injecting dried, milled seaweed on the tail end of the air blast that's applied. The engine and air compressor unit are left off the green so there is less weight and fewer wheels on the grass while making the machine more manoeuvrable. The compressed air is fed by an umbilical hose, with the air pressure constantly regulated so that the operator can see the top surface move upwards slightly. It's a dramatic sight to see the earth move.

"The members of the club were fascinated by the process," says Tony, "and they were in disbelief that the greens were up and running again after the treatment." Seeing the earth move the operator knows the soil has been fractured from one metre depth back to the surface, which is essential to the process. Amazingly, the earth settles back down and the seaweed sticks to the fractures and fissures created by the main air blast. Eventually this will swell and contract with the moisture content in the soil. This 'breathing' effect helps keep the fissures open longer to enable the soil to rejuvenate naturally.

The probe is then withdrawn and the process repeated at two metre spacing on a staggered grid pattern, while the Greenkeepers follow behind to backfill the probe holes with aggregate and then the top 2.5cm/1" to 5cm 2" with their top dressing. The treatment will aid, in the long term, the aeration and ventilation, allowing air and water to percolate into the root zone. Aerating the soil down to a metre results in stronger root growth and an altogether healthier sward. As a specialist deep aeration treatment it is unlikely the process will be needed again for many years, especially as Tony will continue to use his top surface aerator which will link down to the Terralift fissures.