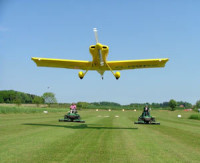 Northrepps International Airport, located close to the north Norfolk coast near Cromer, has won the Brian Cosgrove Award for the best kept airfield in the United Kingdom for 2004.

Presented by the British Microlight Aircraft Association, this award acknowledges the high standards maintained at the airfield, especially the condition of the grass airstrip which is particularly microlight friendly.

The airstrip measures 493 metres by 23 metres and there's also a grass parking area, both of which are mowed once or twice a week depending on the weather conditions, by local contractor Hayden Ltd, using a Ransomes Highway ride on triple mower.

There has been an airfield on the Gurney family estate since the early 1930s and one located at the present site since 1968. Chris Gurney operated the airstrip on a part-time basis until 1982 and since then it has become a full time business. Various companies use the facilities as a base for crop spraying, air taxi services and for servicing the offshore oil and gas industry.

Northrepps is open all year round and accepts single and twin engined light aircraft, civil and military helicopters and is used by the emergency services including the Air Ambulance and RAF Air-Sea Rescue helicopters for training air and ground crews.

Chris Gurney commented, "We are obviously thrilled and delighted to have won such a prestigious award as this and it's a testament to the effort and resources that we have applied to Northrepps over the past 23 years. It's also a reflection on the superb efforts of Colin Hayden and his team using the Ransomes machine. With his previous mower it took around four hours to cut the strip, but with the recently purchased Highway it takes about an hour."

International is a pertinent description for Northrepps as pilots from Holland, Belgium and Germany are regular visitors. The furthest visitors arrived on a flight from the Pyrenees on the French/Spanish border.