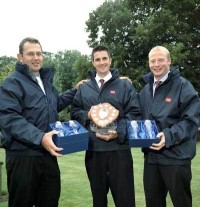 The competition, now in its 16th year, is open to the 3,000-plus Greenkeepers in the UK and Ireland currently studying for industry qualifications, who have been nominated to enter by their colleges.

Alan was nominated by his course tutor at Plumpton College and proceeded through a regional final before going before a panel of specialist judges at the national final of the competition, which is sponsored by turf machinery and irrigation systems manufacturer Toro, and organised by BIGGA.

Alan is now looking forward to his prize - a once-in-a-lifetime, all-expenses-paid trip to the United States early next year. There he'll attend a six-week residential turf management study course at the University of Massachusetts. Following that, he will visit The Toro Company's worldwide headquarters in Minneapolis, Minnesota, as well as the renowned Golf Course Superintendents Association of America Conference and Show in Atlanta.

Alan said: "I really didn't expect to win. The quality was so high and all the finalists had impressive backgrounds and superb knowledge of Greenkeeping. When I wasn't named as one of the two runners-up I thought that I had lost out completely. Any one of us deserved to win it."

Alan, 25, has been in greenkeeping since he was 15. In 2000 he took his NVQ Level 2 in Amenity Horticulture and has since gone on to gain Level 3 in Sportsturf Management. He has also worked for Toro dealer John Shaw Machinery as a turf machinery technician and is qualified as a factory-trained technician with a number of turf machinery manufacturers.

In addition to the excitement of the competition, Alan recently got married to Becky, who moved both house and job when Alan joined Ham Manor. "I must thank Becky. Her encouragement and support throughout my career has made a huge difference," Alan said.