Alan Ferguson is Division 1 Groundsman of the Year 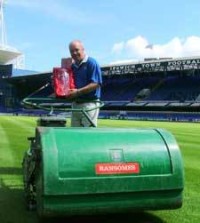 Alan Ferguson, head groundsman at Ipswich Town Football Club is the Nationwide Football League Division 1 Groundsman of the Year for 2003/04. He received his award from Gordon Taylor, chief executive of the PFA at a presentation ceremony at the City of Manchester Stadium recently.

This is the fourth season out of the last eight that the Portman Road pitch has received a national award and Alan recognises that it is a testament to the consistency and teamwork of his highly motivated and dedicated staff.

"We have a superb team here at Ipswich, who are determined to produce the best possible playing surfaces, both here at Portman Road and at our training and academy complex at Bent Lane. David Driver, our senior groundsman, has been with us for 16 years and together with the other guys deserves the credit for this award. Last season the pitch was probably in the best condition since I joined the Club and I would have been really disappointed if we hadn't won. From the England game last August to the Elton John concert this July, the pitch has been in superb shape. It has also recovered exceptionally well following the concert and will be in tip top condition for our first Championship home game against Gillingham.

"We actually operate on a very tight budget and I'm fortunate to have very close working relationships with Ransomes Jacobsen and Scotts, both major players in the turfcare industry and based here in Ipswich. They are very supportive and often provide equipment, materials and advice to help us out.

The criteria for the award are a combination of marks from referees and visiting managers which are pooled to create a shortlist of pitches. The top three are visited by Steve Baker of the STRI who inspects the pitch and looks at the administration and management techniques involved in the pitch maintenance regime, before announcing a winner and two highly commended runners up.