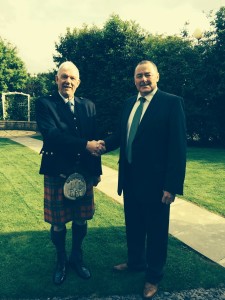 Dennis and SISIS area sales manager Alan Ronaldson has retired after twelve years' service with the company. During this time, Alan was responsible for the development and expansion of dealers for both brands in Scotland, North of England and Ireland.

He joined the Howardson group in 2002 having previously worked in the industry for over 30 years at a number of companies within the groundcare industry.

He is well-known to many throughout the trade having supplied turf maintenance equipment to some of the highest profile sports clubs and venues in his region, such as Glasgow Celtic, Glasgow Rangers, Hampden Park, Murrayfield, Croke Park and the Aviva Stadium as well as grass roots clubs across all groundcare markets.

Alan lives in Bangor, Northern Ireland with his wife of five years, Lorraine. He is a keen piper, both solo and in a band and has been participating in and judging competition at the highest levels across different countries for many years.

His main plan for retirement is travelling the world and visiting destinations that he and Lorraine have been putting off for the last couple of years. He is also looking to resume his teaching of the bagpipes and drums.

"I've seen some massive changes here at Howardson Ltd over the last twelve years and I've thoroughly enjoyed my time. Probably the biggest change I've seen was the acquisition of SISIS back in 2011. I'm very proud to have worked for a British manufacturer who has been a pioneer in the turfcare industry."

Commenting on his retirement Toby Clarke, sales manager at Dennis and SISIS said: "With his loyalty and passion for both Dennis and SISIS, Alan has played a key role in adding to the success of our products within his region.

He has a hands-on approach to solving problems, a great way with people, and seemingly limitless energy. Everyone here wishes him a very happy and well-earned retirement."