0 Alert over moth pest in London and Berkshire 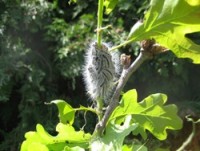 People in west and south London, and Pangbourne in Berkshire, are being cautioned not to touch the oak processionary caterpillars which are now emerging in oak trees in these areas.

They are also advised to keep children, pets and livestock away from the caterpillars and their nests, and to report any sightings.

The caterpillars develop into the oak processionary moth (OPM), a recent arrival in Britain and a forestry pest and potential health hazard. They damage oak trees by feeding on the leaves, in some cases leaving the trees severely defoliated and vulnerable to other threats.

The caterpillars have thousands of tiny toxic hairs which, on contact, can cause itchy skin rashes in people and animals. Eye and throat irritation have also been reported symptoms. They pose the most risk to health during May and June when the caterpillars are in the final stages of development before becoming a moth. The hairs can be blown on the wind and left in the silken, web-like nests which the caterpillars build in oak trees.

Forestry, health and local authorities are working to contain an outbreak of the moth in several London boroughs, and to eradicate a small outbreak in Pangbourne, near Reading in West Berkshire.

Alison Field, South East England and London Area Director for the Forestry Commission, said the public could help, although she urged people not to touch the caterpillars or their nests.

"We welcome reports of caterpillars or their nests from the public or others, such as gardeners and tree surgeons, who are out and about in areas with oak trees," she said.

"However, the public should not try to remove the caterpillars or nests themselves. This task needs to be carefully timed to be most effective, and is best done by specially trained and equipped operators."

"We strongly advise people not to touch or approach the caterpillars or their nests because of the health risks caused by the toxin-containing hairs. Pets can also be affected and should be kept away as well.

"Anyone who experiences an itchy or painful skin rash or a sore throat and irritated eyes after being near oak trees in these areas should consult their GP or NHS Direct.

"We have issued advice to local GPs and other health professionals to help them identify when patients have been affected by the caterpillars and to advise them on appropriate treatment.

Anyone having oak trees pruned or felled in the affected areas must contact the Forestry Commission's Plant Health Service beforehand on plant.health@forestry.gsi.gov.ukor 0131 314 6414 for advice about safe removal of the material.

• Sighting reports - can be sent to the local council (see the Questions & Answers document at www.forestry.gov.uk/oakprocessionarymoth for contact details) or to the Forestry Commission's Forest Research agency at christine.tilbury@forestry.gsi.gov.uk; 01420 22255.

• Health advice - Anyone who is worried by an intensely itchy or painful skin rash, sore throat and irritated eyes, and who might have been near oak trees harbouring OPM, should consult their GP or call NHS Direct on 0845 4647. Health information is also available from www.hpa.org.uk. Anyone concerned about their pets should contact their vet.

• Pest control - A list of local pest control operators qualified to deal with OPM is available from the Forestry Commission on 0131 314 6414 / plant.health@forestry.gsi.gov.uk, or the local Council. (See the Questions and Answers document available from www.forestry.gov.uk/oakprocessionarymoth for Council contact details).

Further information is available from www.forestry.gov.uk/oakprocessionarymoth.

For more information about the Forestry Commission, please visit www.forestry.gov.uk

1. Sighting reports should include a precise description of the location. An Ordnance Survey grid reference is ideal, otherwise an accurate postal address with the full postcode, and/or a clear description of the tree's exact position, is helpful. Digital photographs may also be sent to aid identification.
2. The Forestry Commission hopes that the Pangbourne outbreak, which is still small, can be eradicated. However, it has not proved possible to eradicate the London outbreak, first detected in Ealing and Richmond in 2006. The objective there is to slow or prevent its spread, and keep its population as low as possible.
3. The London outbreak area is divided into two zones - the core outbreak area comprising Brent, Ealing, Hounslow, Richmond Upon Thames and Hammersmith & Fulham Boroughs; and a 10-kilometre (6-mile) 'buffer' zone around the core area, taking in areas of Barnet, Harrow, Hillingdon, Camden, Westminster, Kensington & Chelsea, Lambeth, Wandsworth, Merton, Kingston Upon Thames, Sutton, Croydon and Elmbridge, Epsom and Ewell, Southwark, City of London, Islington, Haringey and Spelthorn. Forestry Commission inspectors are surveying the buffer zone for infestations. They will serve statutory Plant Health Notices on the owners of any infested trees in the buffer zone, and in the core zone where they threaten to spread into the buffer zone, requiring them to have the infestations removed. Management of infestations in the core zone is primarily the responsibility of local authorities and tree owners.
4. The best times to tackle the pest are in the spring, with insecticide after the caterpillars have hatched, and in the summer by removing the distinctive white, silken nests where they congregate and pupate into adult moths.
5. OPM (Thaumetopoea processionea) gets its name from the caterpillars' habit of moving about in nose-to-tail processions. A native of southern Europe, it most likely entered Britain as previously laid eggs on young oak trees imported from Europe for planting here.
6. Nests are always dangerous to approach because of the presence of the caterpillars' toxic hairs. The peak danger period for human health is from mid-May to late July.
7. The caterpillars pupate in their nests in late June and early July and emerge as moths between one and four weeks later. The moths lay their eggs in oak trees in July and August, and the eggs hatch caterpillars the following spring. The caterpillars feed in groups, and at other times congregate in communal nests made of matted, white silk webbing - typically about the size of a tennis ball.
8. The caterpillars do not necessarily kill trees - they usually recover - but they would add another unwelcome stress to Britain's oak trees, which in some areas are already suffering from other stresses such as drought and acute oak decline.
9. A native of southern Europe, OPM has become established as far north as The Netherlands over the past 20 years.
10. The species will attack other broadleaved trees such as hornbeam, hazel, beech, sweet chestnut and birch, but usually only where they are close to severely defoliated oaks where its preferred food of oak leaves is limited.