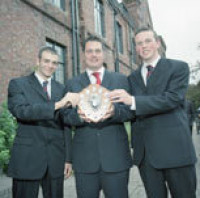 The award is open to the 3000-plus greenkeepers in the UK and Ireland currently studying for industry qualifications, who have to be nominated to enter by their colleges.

Alex won the coveted title after being put forward by Oaklands College, St Albans, then winning through from a regional final before facing a distinguished panel of judges in the national final of the awards, sponsored by turf machinery and irrigation systems manufacturer Toro, and organised by BIGGA.

Alex's prize is the Toro Scholarship - a once-in-a-lifetime, all-expenses-paid trip to the United States. In January/February, he'll attend a six-weeks' residential turf management study course at the University of Massachusetts. Then follow visits to The Toro Company worldwide headquarters in Minneapolis, Minnesota, as well as the renowned Golf Course Superintendents Association of America Conference and Show in Orlando, Florida.

Alex says: "I was surprised even to be considered for the award, but to progress through the regional finals to the national final and ultimately win the title was really unexpected and I'm absolutely overwhelmed. I'm looking forward immensely to visiting the US and the opportunity to improve my knowledge."

Andy Wight, Alex's tutor at Oaklands, says: "Oaklands has trained greenkeepers and groundspersons for over 25 years. Alex is the third Oaklands student to win this award and has accomplished this feat through his mature outlook, willingness to take control of his own learning and a sheer desire to succeed. I'm convinced he'll go on to reach the very top."

Previously a landscape gardener, Alex, 27, who is married to Hannah, joined Woburn Golf and Country Club in 1999. He graduated in June with an NVQ Level 3 in Sports Turf Management.