Who are you? Alex McDermott, (24), Assistant Greenkeeper at The Belfry and Volunteer Groundsman at Wolverhampton Football Club. I am studying for my NVQ 3 in sports turf. 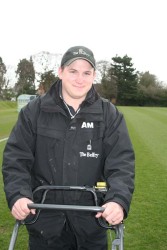 Who's your hero and why? Rally driver Petter Solberg. I'm a big motorsport fan and Subaru world rally team was my team (well it was until this year and the dreaded credit crunch). The bravery and determination of Petter, even though the task in hand might seem impossible, and still giving it 110% is an inspiration.

What is your dream holiday? I think it would have to be a month long trip with the family to Orlando, and try to fit in as many fun parks as we could. Oh, and of course, to get there I would have to borrow Air Force One.

What annoys you the most? The list is endless but TV cliffhangers and Sunday drivers are right up there.

What would you change about yourself? Apart from my belly, not much. By all means I am not perfect, but I am just me.
Who wouldn't you like to be? Osama bin Laden - it can't be good for him.

Favourite record, and why? Has to be Led Zeppelin's Stairway to Heaven - a true classic, a seven minute masterpiece and great value for money. It's great to unwind to and then get fired up and start again with any new challenge.

Who would you choose to spend a romantic evening with? Has to be my loving wife, as we seem to be lost in a sea of nappies since the little man has arrived.

If you won the lottery, what is the first thing you would do? Phone Camelot just to check, and then the normal things - house, car, holiday, and trust funds.

If you were to describe yourself as a musical instrument, what would you be? As I play the piano, guitar, violin and flute I would sooner be a triangle, simple yet still a very key part to any overture.

What's the best advice you have ever been given? Don't do it - but if you do, do it well.

What's your favourite smell? As I am a petrol head it has to be turbos and two stroke from any high revving motor bike or turbo charged Scooby or skyline and, if its all happening in the middle of the Dartford tunnel, even better with the noise too.

What three words would you use to describe yourself? Understanding, patient and competitive.

What talent would you like to have? To be able to put pen to paper easier - with handwriting like mine I should be a doctor.

What makes you angry? Eastenders. I know this is not the most important thing in life, but it does wind me up and waste two hours a week, but I still watch it - and, of course, 'everyones talking about it'!

What law/legislation would you like to see introduced? Euthanasia, I think people should have the right to die if they are sane of mind.